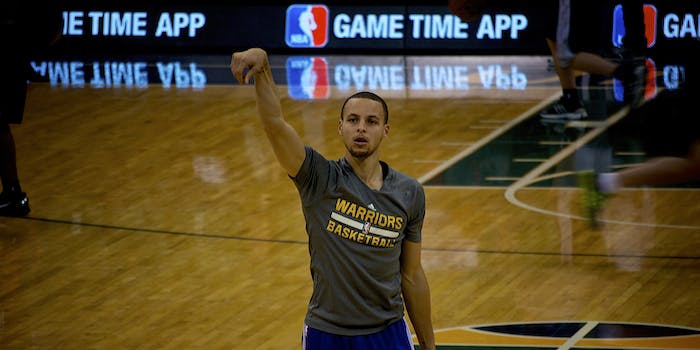 Your illustrated guide to Warriors-Thunder

Can Durant and Westbrook slow down Curry?

The 73-win Golden State Warriors weren’t supposed to meet the third-seeded Oklahoma City Thunder with a Finals berth on the line. The Thunder had other plans, vanquishing the San Antonio Spurs in six games, closing out in dominant fashion last week.

The defending champs now get a blazing-hot team arriving into Oakland, California, for Monday’s night Western Conference Finals opener—but one they’ve actually beaten threes times, to no losses. Curry and the Warriors should nevertheless be very afraid. Their matchup could be as difficult, if not more so, than their once-assumed showdown with the 67-win Spurs. The data scientists at Five Thirty Eight certainly think so: “according to the pre-series Elo ratings (which estimate each team’s strength at any moment), it’s the single best-looking conference finals matchup since 1984.”

Kevin Durant, Russell Westbrook, and Steph Curry are not only three of the NBA‘s most dynamic gunners, they’re also giant Web stars with more than 22 million combined Twitter followers. While LeBron James toys with the Toronto Raptors in the East, the Internet will be hooked on Thunder-Dubs during a best-of-seven series that could go the distance.

Here is your illustrated guide to how the West will be won, complete with crucial points straight from leading hoops bloggers.

That’s a trick question because no player is 100 percent at this stage of the season, even with long layoffs between rounds. The real question is whether the scoring champion and now two-time MVP is in Rating 99-NBA 2K mode, or if his knee will continue to need close attention throughout—even after playing well in the closeout win versus Portland. If he’s leaning toward the former, look for a continuation of meme-turning closeout performances.

2) Can the Thunder play D or what?

There are two keys to OKC having any shot—nuanced physicality on Curry and Klay Thompson, and defensive consistency for four quarters. But this has been a middling defensive team, as Bleacher Report’s Grant Hughes noted:

The Thunder ranked 12th in league defensive rating this year—an underwhelming spot in light of the team’s overall athleticism and individual stopping power. Communication was a key issue, as were lapses in focus… OKC looked stouter on defense against the Spurs because San Antonio gradually stopped moving the ball and attacked in isolation far too often. That’s no way to exploit a defense that, when stretched, tends to come apart at the seams.

The Thunder’s use of their “death” lineup—including Serge Ibaka and Steven Adams—worked over the Spurs’ old front line. They must make entering the lane extremely hazardous; and there can be no plays like these, where Adams, Ibaka, or Enes Kanter are stuck chasing, with no help.

For all the great qualities he does have, Westbrook isn’t exactly an all-NBA defender. He’ll drift off, looking and worrying about things he shouldn’t.

This sort of faulty footwork and laziness will usually mean a Curry or Thompson bucket. On the flip side, Curry has to be salivating. In the last couple games, Westbrook looked completely defeated and shaken by Curry, often giving lackluster effort.

Westbrook must stay at home in his fundamentals, and help must be smart, willing, and available. However, sometimes it doesn’t matter. On this “death play”—one of the high screens so close to the 3-point line—recovery isn’t possible.

Simply put, Golden State must contain the dynamic duo. Durant has destroyed the Dubs, averaging over 36 per contest in the season series. The Warriors seem to be acknowledging Durant’s superiority and do the best they can by making him drive into help as often as possible—which helped force nine Durant turnovers in the last matchup. Strategic use of human utility knife Andre Iguodala on Durant in crunch time will pay dividends, forcing the shooter into more contested jumpers.

Defensively, Oklahoma City does not present any additional looks that would buckle Golden State coach Steve Kerr’s knees. But Curry should not be forced to guard Westbrook for long stretches. Kerr must ensure minimal exposure for Curry guarding anyone other than Dion Waiters, Andre Roberson, or passing lanes. Westbrook’s penchant for getting into and breaking the teeth of defenses must be mitigated against—it is what their offense is predicated on.

The Westbrook drive—whether out of an isolation or pick-and-roll, creates catch-and-shoot opportunities… In transition, they are one of the most dynamic teams in the league… Quantified Shooter Impact measures a player’s ability to convert shots relative to an average player, and Durant leads the league with a qSI of 26.1 in transition—meaning that given the shots he gets, he has an eFG% that is 26.2 percentage points higher than an average shooter.

5. How do you get so far into a preview, and not mention Klay Thompson, a two-way player rivaled only by Kawhi Leonard, in depth? How about Draymond Green?

What’s understated and critical about Klay Thompson’s double-duty skills is that his defense will offset most of his (rare) bad shooting nights, and up the necessity for him to stay out on the floor as often as possible. As good as reserves Iguodala and Shaun Livingston are, they don’t offer nearly the same bang for the buck, per minute.

Most games, Draymond Green is stuffing the stat sheet, but you’re never quite sure how he accomplished it. Durant and Ibaka must ensure Green isn’t near the rim, or getting his way out of Curry-centric fears. Triple-doubles for Green mean Golden State wins.

With a tried and true formula—centered around Curry and Thompson’s deadly marksmanship—the Warriors won’t be forced to alter much. Thunder coach Billy Donovan will need to have an immediate defensive plan for tightening the clamps on Curry and Thompson, primarily. They must be made to feel claustrophobic whenever possible. However, The Thunder’s tendency to waver in concentration will eventually display itself, hindering their chances.

Aside from Curry’s greatness and the Warriors’ overall skill/IQ combination, their best asset is the uncanny ability to steel and steady themselves, regardless of game situation. There is no moment too big, no detail uncovered. Unless the Thunder can create consistently choppy waters for Golden State, the defending champions will sail into the Finals. Warriors in six.