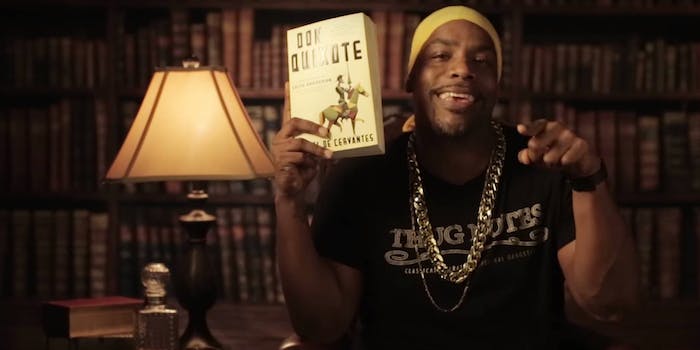 How YouTube hit ‘Thug Notes’ got the lit world’s attention

The new book spin-off of the YouTube hit Thug Notes—Thug Notes: A Street-Smart Guide to Classic Literature, written in character as Sparky Sweets, PhD (played by comedian-actor Greg Edwards)—follows the series’ lead and gives synopses of literary classics ranging from Hamlet to Catcher in the Rye that are both informative and comically gangsta.

But the genesis of Wisecrack—which produces Thug Notes and other funny-but-smart webseries such as Pop Psych, 8-Bit Philosophy, and Earthling Cinema—is anything but street. The seeds for the L.A.-based company were sown at the University of Texas at Austin in the mid-2000s, when two of its co-founders, Jacob Salamon and Jared Bauer, met in astronomy class. Salamon was a business major; Bauer was pursuing a degree in radio, television, and film.

“We sort of hit it off, two Jewish guys in Texas who loved entertainment and film,” recalled Salamon, who is Wisecrack’s CEO. “We became fast friends, and we kind of made a pinkie promise that once I had made some money in tech, I was going to come out to L.A. and come create content— movies specifically.”

At the time, Salamon was interning for Bazaarvoice, which provides customer ratings and reviews technology for online retailers. He was only the third employee at the company, and he watched it grow from an idea on a laptop into a multi-national operation.

“It was the best business school ever,” said Salamon, who eventually took a full-time position at Bazaarvoice as director of marketing for Europe, the Middle East and Asia-Pacific, working out of the company’s London office. “Every single element of it, from the technology to the entrepreneurship, connects back to building Wisecrack. I saw what to do and what not to do.”

After Bazaarvoice went public, Salamon took his windfall and moved, as promised, to L.A., where he formed a production company (initially called Napkin Note Productions) with Bauer and fellow co-founder Todd Mendeloff.

“[The Bazaarvoice money] gave me the latitude to be able to move out here without the stress of saying, ‘I’ve got to go wait tables.’ I had the means to say, ‘Let’s go dabble,’” Salamon said. “I did put in some of my own money, about $15,000, to bootstrap the company and develop some initial pieces of content.”

Instead of movies, they wound up producing Web shows. Their first project was Bubala Please, a comedic series about a pair of latke-making, dreidel-spinning, menorah-lighting gang-bangers that racked up close to 1.5 million views on YouTube.

“He was pursuing his PhD, and he became so frustrated by the ivory tower nature of academia, where the higher you went studying literature, the more and more exclusive it became,” Salamon explained. “Joe had this kind of manifesto that literature should be enjoyed and understood by everyone. So Jared said, ‘Why don’t we try to create a show.’ It’s pretty much dead-on in terms what we’re trying to do with all our shows, which is put this knowledge in the hands of everybody.”

Thug Notes debuted in June 2013. As it gained popularity, people started coming of the woodwork with offers for Wisecrack. One of them was a representative of Vintage, a division of publishing giant Random House, who contacted them via email about a possible book deal.

“It was a very heartfelt message that was like, ‘We publish all of these books that you are analyzing and getting out into the world again. You’re breathing new life into this literature,’” Salamon recalled. “We had no idea what to do or how much to expect, but they were absolutely in love with the project and they walked us through the process of finding an agent and doing everything else that we needed to do.”

“There’s plenty to be made in digital alone, but right now, the big money is still in linear TV,” Salamon said.

But, co-founder Mendeloff added, “We love digital. Digital is deep in our DNA. And we have a great love and affection for the audience that we’ve developed in digital, and that’s not going away.”