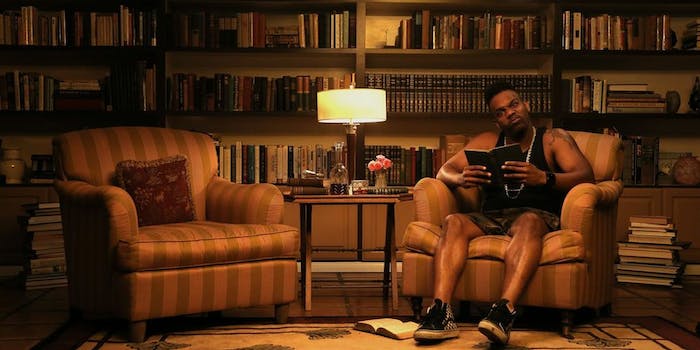 “Thug Notes” takes literary classics out of the academic ghetto

If you’ve ever scrambled to complete a book report the night before it’s due, you know the value of SparkNotes and CliffNotes. But if even that is too dense and boring, you should try YouTube’s newest literary sensation, Thug Notes.

The show breaks down the plot, characters, and themes of some of the greatest books ever written—from To Kill A Mockingbird to Crime and Punishment—in a way that’s  accessible and entertaining. In just under two months, the channel has racked up more than 1 million view and 80,000 views.

“I see education as an art form,” noted host Sparky Sweets, an L.A. native who claims to have a Ph.D. in Classics, “and it’s my intention to help more people learn about literature and humanity through comedy.”

On the occasion of Thug Notes’ latest tutorial, J.D. Salinger’s The Catcher in the Rye, the Daily Dot talked to Dr. Sweets, the thug behind Thug Notes, about his background in academia, and why he chose to present literary works in a way everyone can understand.

How do you choose which books you’re going to review?

My “syllabus” is based on the most popular reading assignments across America. I research which books teachers and students will most likely be reading this year and create my episodes from there. I’m working toward building a library of videos that students can reference anytime.

My dream is to have a Thug Notes episode available for any major piece of work. As for Crime & Punishment, it just so happens that it’s one of my favorite books. Even though Dostoevsky is not too widely assigned, I made that episode because I love the book so much.

What was the inspiration for Thug Notes?

It all started with my frustration with academia.

Right now, the idea of truly comprehending literature is enshrouded by a veil of unnecessarily pedantic terminology and intellectual one-upmanship. Academia, as it is today, is not solely about love for the works. It’s also about “wearing” it. For many, it’s not about making the ideas of literature universal—instead it’s about building themselves up to a virtually inaccessible plane and saying “if you want to truly understand literature, you have to get on this high-brow level with me.”

But the truth is the gift of literature is universal and should be made accessible to everyone on every plane. So Thug Notes is my way of trivializing academia’s attempt at making literature exclusionary by showing that these ideas can be communicated to people on the opposite side of the social stratum. I can take grandiose ideas and make them truly understood by everyone.

Have you faced any criticism for the use of the word “thug” or from the academics you speak about above?

I keep the material as accurate and informative as I can, and my audience knows the show is tongue-in-cheek.

By making the show funny, I allow my viewers to let their guard down and be entertained first and foremost. I think this is why so many people tune in and actually learn something from the show.

I did get one piece of feedback from the academic community saying this is not the way to teach people. But all I need to do is look through the thousands of comments that come through each week to see people are, in fact, learning. And in most cases, they’re comprehending more in four minutes than they did in class over the course of a semester or school year.

Whether people like the approach or not, the fact that viewers are appreciating and understanding classical literature like never before is undeniable. That makes me proud.