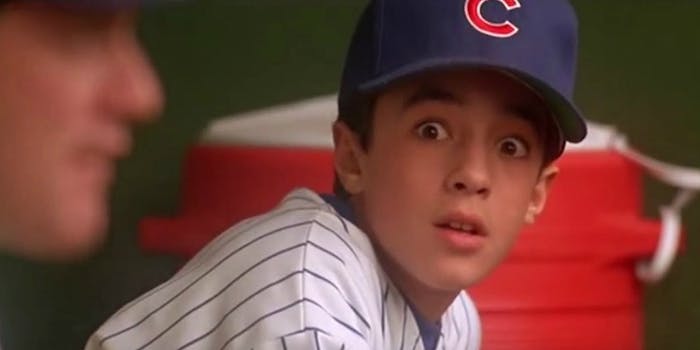 What the Cubs need is some Rowengartner magic, apparently.

The last time the Chicago Cubs had a legitimate chance to win the World Series, they turned for help to their rookie of the year, 12-year-old Henry Rowengartner, to lead them to their first title since 1908. Unfortunately for long-suffering Chicago fans, that triumphant scene was pure fiction as it was actor Thomas Ian Nicholas who played a preteen whose broken arm unexpectedly allowed him to throw the ball 100 mph and lead the Cubs to glory.

But that won’t stop Nicholas from hoping that some of that old Rowengartner magic can rub off on his favorite team, even though the Cubs are behind 3-0 to the Mets in the National League Championship series and are one loss away from elimination.

And Nicholas, who became a Cubs fan while filming the 1993 movie and who eventually married a DJ from Chicago, will do his best to give his favorite team a lift—simply by being there.

Several times in the past, Nicholas has thrown out the first pitch at Wrigley Field and has sung “Take Me Out To the Ballgame” during the seventh-inning stretch. But he apparently hasn’t worn his Rowengartner jersey since the film wrapped in 1992.

“Usually when I go to the game, I wear the jersey the Cubs made for me with my last name, Nicholas, on it, but I called the team and I said, ‘Can you make a Rowengartner jersey for me?'” Nicholas told ESPN. “I’ve never done that. I haven’t worn a Rowengartner jersey since the movie, but I feel like we kind of need it right now. It’s kind of like my rally cap.”

And it’s a last-minute trip. Nicholas had been at Disneyland celebrating his son’s birthday, but he planned to take a 7am flight to Chicago on Wednesday in order to make the game on time.

“I wasn’t planning on going out for the postseason, but after they won the wild card and then beat the St. Louis Cardinals, the excitement started to build with fans of the Cubs who are also fans of Rookie of the Year,” Nicholas said. “My Twitter feed started to get busier and busier during the postseason, and people started getting excited. I got excited, too… There are a lot of superstitions in baseball, so I’m just hoping that throwing on the Rowengartner jersey is the lucky rabbit’s foot that we need in this series. Hopefully this is the turnaround.”

Nicholas also will perform with his band at a nearby pub after the game, and if the Cubs win to keep their season alive for at least one more contest, I imagine their fans will pack the place to thank the former pretend Cubs pitcher for his very real impact.