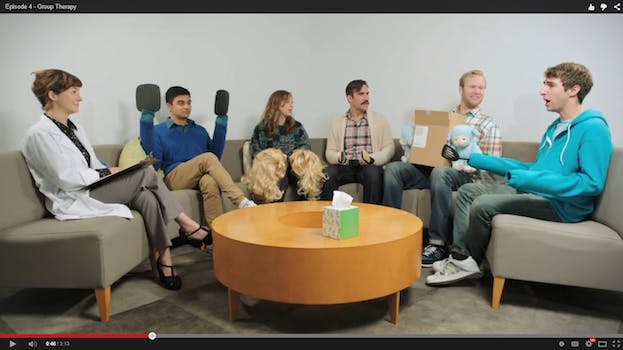 These people aren't so handy to have around.

As you grow older, you begin to learn a lot of ugly truths. Let’s face it: life isn’t fair, some men just want to watch the world burn, and, perhaps worst of all, we live in a “hand-handed world.”

This is the claim of one new YouTube series, anyway. “Things For Hands” tells the story of the sad people out there who suffer the debilitating illness of having various objects in place of hands. This condition affects one out of every 10 million people, according to the channel’s introductory video.

The YouTube series, which was produced by Jeff Wysaski (better known online as Pleated Jeans), currently has five episodes, each one of which is devoted to a different service or room of the Center for People with Things for Hands. Take my hand—and I’ll take your spatula—as we stroll through, for example, the student center…

….and the employment center…

Of course, art therapy is certainly something we could all use a little more of, no matter what “handed” category we may fall into.

Screengrab via Things for Hands/YouTube