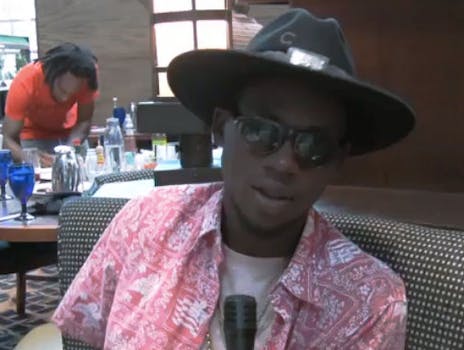 Rapper lets fans dictate part of his setlist, decide what he wears on stage.

It’s not terribly unusual for a rapper to give a shout-out to his mother at a concert.

At the Lustre Pearl in Austin on Saturday, however, Theophilus London asked his to close her browser and step away from the computer before performing “Girls Girls $,” the strip club calling card from his new album, Timez Are Weird These Days.

The occasion was the world premiere of Noisey.com’s Special Engagements, a global live-stream concert series, presented by Dell and Intel. While both YouTube and Facebook have hosted online viewings from major events this summer – Coachella and Widespread Panic at the ACL Live at the Moody Theater, respectively – Special Engagements came with a social media twist: fans voted on Dell’s Facebook page to determine different aspects of the show.

The evening was essentially a backyard party – Lustre Pearl is a bar converted from a historic home in the Rainey St. district – on a tech-boom budget, with five cameras filming the action. London made an ideal headliner for such an occasion. The Brooklyn-based rapper’s a retro-minded progressive that personifies the band-as-brand aesthetic. Mountain Dew’s Green Label Sound released two of his early singles (“Humdrum Town,” “Flying Overseas”), and he’s worked on fashion campaigns with Gucci, Tommy Hilfiger, and Cole Haan.

By popular online demand, London rocked a red sequin tank-top he designed for the occasion (there were three tops for fans to choose from). Alongside host/hypeman Telli of Nijasonik, London paused between songs to engage the different followers on Twitter who tweeted the requested hashtag, #NoiseyATX, and closed the near-hour-long set with the live premiere of “I Stand Alone (Gigamesh Remix),” another element determined by pre-show voting and made available for free download to those that participated.

Those viewing from home could also chime in on the accompanying live chat room in a manner not unlike Nesmith’s simulated VideoRanch-3D. Those social community elements might not seem like much, but Special Engagements achieved a rare feat in its inaugural outing: a personalized concert experience that works in real space and/or online.