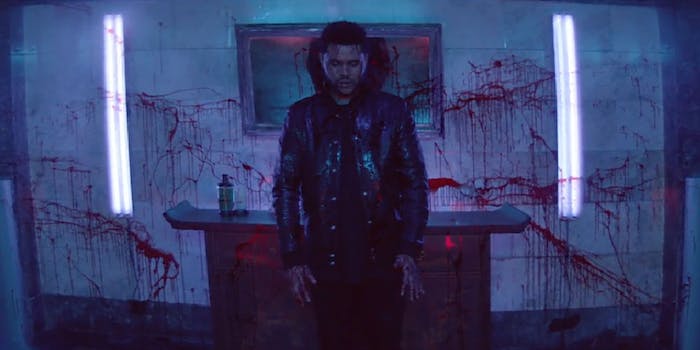 The Weeknd’s stunning ‘Mania’ short film is bloody and intense

All of these new songs are fantastic.

Pop quiz: You’re a critically acclaimed R&B star who just wrote several arresting and seductive jams. How do you pick a song for the radio?

If you’re the Weeknd, you make a hazy, fatalist short film that is scored by all of the aforementioned tracks.

“I ran out out of tears when I was 18,” the star born Abel Tesfaye sing-raps on Mania, before bragging about how he went from “homeless to Forbes list.”

He says he feels “useless” when he’s not making money. The Weeknd’s music—despite the glitz and mainstream reach—is bitter, combative, and uncomfortably personal. Mania finds the strung-out star aimlessly wandering a night club, openly detailing his drug use, and then it gets bloody.

In the 12-minute film, the Weeknd gets with a half-woman, half-panther angel figure, so at least it has a happy ending.

The songs from the Mania short are poised to feature on Friday’s imminent Starboy record, a high-voltage affair that will include guest performances from Daft Punk, Lana Del Rey, Kendrick Lamar, and Future.