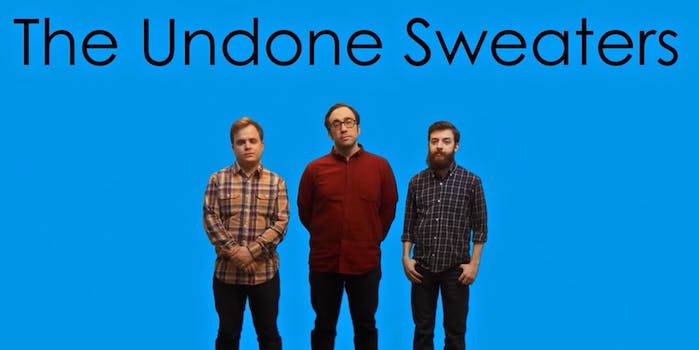 It's better than anything Weezer's done since 'Pinkerton.'

One of the more depressing facets of growing up in the ’90s was having to watch Weezer ruin its reputation in the 2000s. Blame the Millennium bug, blame Harvard to where frontman Rivers Cuomo decamped at his creative peak, blame those half-Japanese girls.

While they still put out albums called things like Raditude and Hurley with admirably honest, ugly artwork, the band tours arenas playing their first two, and best two, albums in full.

So there’s something immediately humorous about a Weezer cover band because in some ways that’s all the real Weezer is now anyway; still trying somehow to replicate Letterman from 1995 but only really capable—either through the loss of talent or interest—of producing hollow, repetitive lint.

The Undone Sweaters are a real Weezer tribute act, only the second best in Brooklyn, apparently, and their namesake comedic webseries cashes in on these divided feelings about their inspiration. They are the band we all wish Weezer still were. They only play the early stuff, they seem pretty content wallowing in their repressive nerdom, and they’ve still got a noticeable sense of humor. Cuomo, who once could raise a chuckle in a song about being beaten up with his Korean girlfriend, doesn’t look like he’s laughed in a decade.

That they have a comedic sensibility is not surprising, being the type of people who started a cover band with a possible repertoire of only two albums. And it means that the series doesn’t just have to be the fan convention that you may be expecting. Although there are scattered references, including an excellent reason as to why The Undone Sweaters don’t have a bass player, as performers and writers the band are strong enough that Cuomo et al. are only ever the most ephemeral of narrative jump-offs.

It’s a very watchable series that is now just into its second season. Which means that the present is the time to dive on in. If the creative trajectory of the Sweaters’ inspiration is at all analogous you’d know that the show isn’t going to get any better than this.