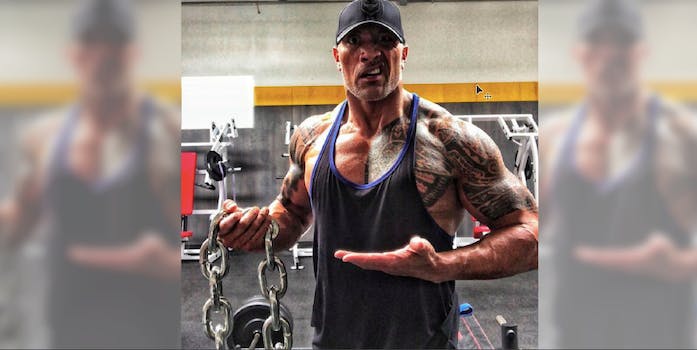 Why is the Rock meeting with the Saudi crown prince?

It's not a great look for Dwayne Johnson.

Can you smell what the Rock is cooking? If you answered, “A regrettable foreign policy double standard,” then you are correct.

Saudi crown prince Mohammed Bin Salman has been on an American PR tour over the last several weeks, travelling from coast to coast, from the White House to Hollywood to Silicon Valley, in hopes of gaining American support for his oppressive regime, which is currently carrying out a brutal military operation in Yemen, one the U.N. called “the world’s worst humanitarian crisis.”

This week, the Crown Prince stopped by Los Angeles to wine and dine Hollywood big shots, including megastar Dwayne  Johnson.

The PR blitz from Saudi Arabia is pushing the message that Salman has put his country on the path to reform. The Saudis, and their American boosters, have pointed to reforms like allowing women to drive and cracking down on corruption. You don’t have to look far to find op-eds in major papers with titles like “America Should Get Behind Saudi Arabia’s Revolutionary Crown Prince.”

The reality is that Saudi Arabia is an incredibly repressive regime. Life there is very difficult for women and the country’s largely immigrant workforce toils in slave-like conditions. Homosexuality and any form of dissent are punishable by death. For his part, MBS (as the Washington foreign policy establishment likes to call him) rose to power last year amid a soft coup that led to the imprisonment and torture of his opponents, including members of the military, prominent businessmen, and even members of his own family.

In a statement released on March 29th, Amnesty International wrote:

“If you didn’t know better, you would think Saudi Arabia is on a path to major reform. However, in the months since the Crown Prince’s appointment, we have seen little reason to believe that his overtures are anything more than a slick PR exercise. In fact, Saudi Arabia retains an atrocious human rights record and the situation has only deteriorated since the Crown Prince was appointed as official heir to the throne in June 2017.”

Despite MBS and Saudi Arabia’s awful track record, the Crown Prince was welcomed to Hollywood with open arms this week. It’s unfair to single out just the Rock, as the list of MBS schmoozers reads like a list of Hollywood’s most notable names. According to the Hollywood Reporter, MBS met with a host of Tinseltown power players, including Disney CEO Bob Iger, Rupert Murdoch, James Cameron, Michael Douglas, Oprah Winfrey, and Morgan Freeman.

Following their dinner, The Rock took to Instagram to lavish praise on MBS.

Money talks in America, and it is no coincidence that Salman’s visit coincides with the announcement that movie theaters are set to open in Saudi Arabia for the first time in decades.

It was announced on Thursday that Black Panther will be the first film to screen in the country in thirty-five years. Variety reported that this was just one piece of a broader plan by the Saudis to build an entertainment industry outpost in their country. MBS is said to have pitched his long-term vision for entertainment in his country to some 250 industry executives at another event during this trip.

The plan is said to include partnerships with Cirque du Soleil, National Geographic, and Marvel, among various other entities.

Meetings like this speak to a longstanding double standard in American foreign policy. While countries like Iran or Syria are criticized and isolated for their human rights violations, Americans are willing to overlook similar acts committed by countries with greater economic possibilities. Saudi Arabia, the UAE, and Israel seem to be able to operate with impunity and still have a seat at the table, whether it be in Hollywood, Silicon Valley, or Washington D.C.

Hollywood is not the only place where MBS has received a warm reception. Thanks to an army of lobbyists and plenty of oil cash, it is pretty much guaranteed that any Saudi representative will receive a glowing reception at any elite gathering anywhere in the United States. It’s no surprise that MBS got a warm welcome at the White House in late March, and the back half of his week was spent in Silicon Valley, where was also welcomed with open arms.

Details on that leg of the trip are still emerging, but Apple CEO Tim Cook and several Google executives were reported to be on his itinerary. MBS also met with Bill Gates in Seattle prior to arriving in San Francisco.

There is certainly an argument to be made for meeting with the leaders of countries that Americans don’t agree with. But, it is difficult not to see a level of hypocrisy in the way the Saudi leader is being lauded in all sectors of American life while his peers in less oil-rich countries are viewed as American enemies. A number of the power brokers who met with MBS applauded his social reforms, but these reforms still don’t bring Saudi Arabia in line with the rights women enjoy in Iran.

This double standard has very human consequences. The blind eye of the Western world leads to clearly uneven conflicts like those between Israel and Palestine or between Saudi Arabia and Yemen, where Western-backed aggressors are free to conduct ethnic cleansing against their poorly armed, oppressed enemies.

Hollywood in particular, with its liberal reputation and #Resistance culture, needs to do better. While the box office and awards season has been about adopting to our current “woke” moment, it seems that there is always enough money out there to compel compromise.

If Hollywood wants to sell itself as the conscious of American liberalism, the blinders are going to have to come off. In particular, if Winfrey or Johnson truly have presidential ambitions, they will have to come up with a better answer than the one unanimously agreed upon by our recent chief executives.