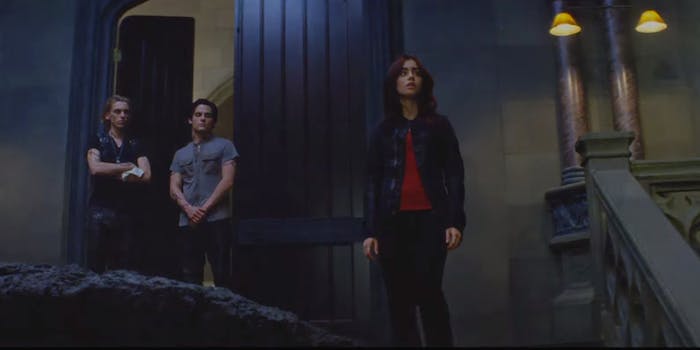 The fantasy series from Cassandra Clare is getting a second life on TV.

The Mortal Instruments is getting a second life on TV.

A film adaptation of City of Bones, the first novel in the bestselling fantasy series from Cassandra Clare starring Lily Collins and Jamie Campbell Bower, flopped at the box office and only earned $31 million domestically. Constantin Film, which owns the rights to the series, is relaunching it as a TV show after pledging to restart production on City of Ashes.

While the production of City of Ashes was halted after City of Bones’s failure to make a profit at the box office, Constantin film and TV head Martin Moszkowicz are as excited as ever to adapt Clare’s work, albeit for a different format.

“It actually makes sense to do [the novels] as a TV series,” he told The Hollywood Reporter. “There was so much from the book that we had to leave out of the Mortal Instruments film. In the series we’ll be able to go deeper and explore this world in greater detail and depth.”

Helix showrunner Ed Decter is tapped to turn the books into a TV show, which is currently in development. No television network or broadcast partners have been attached to the show yet.

It’s unclear if the television version of The Mortal Instruments would pick up where the movie left off or would be rebooted entirely, or whether any of the actors from the film would return to television. Clare is looking forward to her work being explored further in the television format, although she imagines the TV show would be a reboot.

“@Alvampirita: ” What do you think about the news?” I think it is cool. There is so much scope in a TV series to explore the story.

“@uanrunes: ” do you think they will start over with city of bones or start from city of ashes?” Start over.

“I have absolutely no idea!” she wrote to fans on Tumblr about the actors being recast. “I am sure they are not casting at the moment and probably nobody knows. There is absolutely nothing whatsoever I could possibly ever do to influence whether they kept the same cast (assuming they were available) at all, so I will be waiting, like you, to see if they cast new people, and hoping that if they do, those people will be good.”