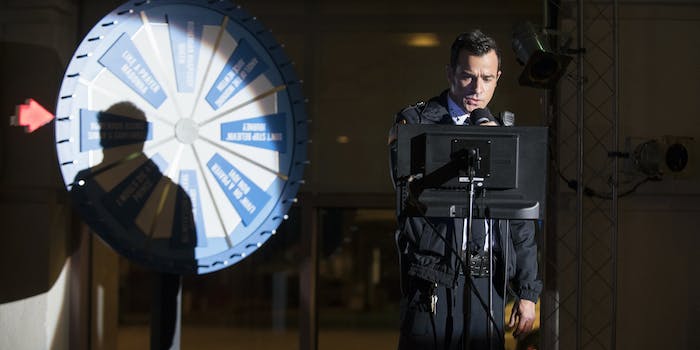 Revelations, miracles, and explosive optics rule the end of 'The Leftovers' season 2.

Warning: This newsletter contains spoilers for The Leftovers seasons 1 and 2. Wondering why you’re getting this? Catch up here with Streaming TV Party’s previous newsletters—and sign up to receive the best of the internet straight to your inbox.

The radicalization of the Guilty Remnant

The first few minutes of “I Live Here Now” unraveled one of the season’s biggest mysteries. Evie Murphy and her two friends didn’t simply vanish into thin air or depart in the middle of an earthquake, as some people imagined. Kevin Garvey didn’t harm them, as John Murphy believed when he shot Kevin in the gut. Rather, the girls faked their disappearance, left their possessions and loved ones behind, and they joined Meg Abbott’s more extreme faction of the Guilty Remnant to emerge from a trailer seemingly filled with explosives.

As Damon Lindelof put it to Maureen Ryan in 2015, the writer’s room was fascinated by the idea of Evie and the other girls being disillusioned and angry. After all, the rest of the world treated their town as a place of salvation after nobody departed on Oct. 14 when it was still just as fucked up as the rest of the world; for one thing, Michael and Evie’s story about a flooded bathtub is far less cute in reality. Then the writers decided to pursue the idea that the girls staged their disappearance.

“When we started kind of kicking the tires [of this concept, an idea came up.],” Lindelof explained. “What if they staged it for a greater cause? A pseudo-religious cause? Jackie Hoyt, one of the writer/producers, suggested they joined the Guilty Remnant. As soon as she said it, we were like, ‘Of course they did.’”

They’re radicalized in the effort, as is Meg, and at the end of it, they emerge victoriously; they even mock Jarden’s theme song. In terms of Meg’s ascension, Lindelof explained while we saw Matt Jamison double down on his religion, he was fascinated by the idea of Meg doing the same thing. “I’m not saying Leftovers is a ripped from the headlines show, but in a world we’re living in with radical Islam and ISIL and ISIS, it felt like that was a story worth telling and wouldn’t it be cool if we were telling that story with Liv Tyler?” he told critic Alan Sepinwall. (You could argue some potential real-world connections with Evie and the other girls as well.)

Making Meg the big bad of season 2 starting in “Ten Thirteen” didn’t always work for me in a season that otherwise was incredibly effective and powerful television, but sometimes the mechanics don’t matter as much when the execution is pristine. There’s something powerful in watching the corruption of the “Jarden of Eden” happening before our eyes—even if it’s a town that’s rotten at its core.

Let Gordon Ramsey show you how to upgrade your quarantine cooking.

The miracles of Jarden and echoes of Mapleton

For much of The Leftovers’ second season, Jarden has been in conversation with itself and the people who have the privilege of living in it. John Murphy claimed that “there are no miracles in Miracle” and assumes anyone who claims otherwise is a charlatan, though he hypocritically lets Jarden continue with its superstitions; Evie is of a similar mind when she sees Meg wrestle with not finding what she was looking for in Jarden. Matt is on the complete opposite of the spectrum because he firmly believes that Mary’s awakening and subsequent pregnancy both happened due to being in Miracle. Between Erika’s birds and Kevin Garvey himself, it does seem like there’s something in the ground of Jarden itself.

The season finale kicks off with an earthquake saving Kevin from drowning himself and transitions to his first of two resurrections this episode; the latter comes after Kevin’s second trip to Hotel Purgatory. Mary Jamison finally wakes up for what I certainly hope is for good—Lindelof indicated as much in a post-mortem interview published before HBO renewed the show for a third season—and proved that Matt didn’t imagine Mary’s brief awakening and he didn’t rape his wife. (To “withhold that piece of information,” Lindelof told Sepinwall about leaving the scene ambiguous at the end of the season, “would have been cruel.”)

The climax of the season, however, felt very season 1. The big bad? The Guilty Remnant. Their actions? Led to a town being set on fire. A disoriented Kevin, having just had a profound experience of some kind, arrives on the scene massively confused just like he’s Troy Barnes returning to his apartment with pizza in Community‘s Darkest Timeline. The Guilty Remnant got people to remember in a very fucked-up way, but it ends on a hopeful note—in which Kevin returns home and finds his family waiting for him. And while they largely know that he has issues, they’re staying firmly in his corner.

Does Kevin Garvey have a death wish?

Lindelof pushed back a little at the assertion that Kevin kept dying in season 2, so you can argue about whether Kevin died for real; TL;DR it’s a matter of perspective. At this moment, that’s how I’ve processed it: Kevin died (or came close enough to it that he was more or less dead), and in the fog, his mind created this luxurious hotel for him to process things. When he drank the poisonous concoction that Virgil made him, you could argue he was on the brink of it, but the second time around? John was right, Kevin should’ve died when John shot him.

Kevin’s second trip to Hotel Purgatory was much more straightforward. He dons his old police uniform, responds to a call for help, and instead arrives in time to witness some hotel karaoke. The man Kevin saw on the bridge gave him his mission to sing a song and pointed out that he pushed a girl down a well, so why couldn’t he get on stage and sing?

Justin Theroux admitted that he couldn’t really sing and was uncomfortable with the idea of doing so, but his rendition of “Homeward Bound” is powerful enough that it doesn’t matter that he can’t sing or that, as Lindelof put it, “was very on the nose”

“I think it helped the scene because of the discomfort of it,” Theroux told Indiewire. “And then you have the song that does all the heavy lifting for you, in terms of what the words are saying. It’s an incredibly melancholic song.”

Fun Fact: Lindelof and company originally wanted to use “Like A Prayer” for Kevin’s karaoke song, but Madonna said no when they requested to use the song. Could you imagine if that had worked out instead?!

– If you had to karaoke your way out of Hotel Purgatory by performing a tune that spoke to this particular moment in your life (and whatever that might entail), what song would you choose?

– How much of Kevin’s visits to the hotel do you think were real? And how much of it was in his head?

Next Week: Another brief reprieve! I’m using next week’s newsletter to look back on season 2 and previewing the third (and final) season of The Leftovers. However, if you want to start on season 3 early, I’ll be looking at the first two episodes—“The Book of Kevin” and “Don’t Be Ridiculous”—in the Aug. 26 newsletter.