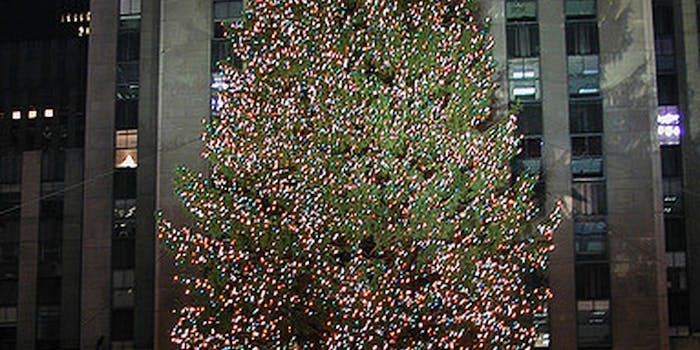 The Hater: The one thing I love about the 30 Rock tree

The real star of NBC's absurd Christmas-tree special is a parody account.

In The Hater, Daily Dot Millennial analyst Jordan Valinsky finds something to dislike in everything.

Aside from Whitney, NBC’s most annoying program is “Christmas in Rockefeller Center.”

“Christmas in Rockefeller Center,” for those of you who do not speak NBC, means “how do we stretch a three-second event into an hour while maximizing ad revenue and jeopardizing the viewers’ sanity all in a jollily produced (sort of) live event.”

But the acerbic, tipsy, woman-loving voice behind the tree’s parody Twitter account, @30RockTree, just made the event somewhat passable. He can’t wait to be done with this holiday season and all that it brings: awful office parties, stressful mall trips, and the wave of upcoming “10 Reasons why Christmas Sucks for Single People” essays on Thought Catalog.

The tree and I share a lot of the same feelings. For starters, the throngs of tweenage girls Justin Bieber manages to attract scares the pine needles out of both of us.

“Wait, what?!? I have to listen to @justinbieber perform AGAIN tonight?!? Right NEXT to me?!? MORE screaming girls?! Where’s my agent?!?,” the tree angrily tweeted when Bieber was recording his performance last week. Even a guest appearance on Harry’s Law would be a step up then dealing with the Beibs.

The tree and I both get our fuel, and ignore our pain in the same WASPy manner: pouring copious amounts of vodka on ourselves. And no, not one of those tiny vodka bottles that are made for babies, but the big bottle.

We even share the same disgust for people who order us around! ‘Producer’s instructions to me at rehearsal: “Just stand there.” Everyone is a comedian,” he tweeted.

I reached out for comment from the tree but he was too busy preparing tonight’s event by, we imagine, sucking vodka through his roots.

“Thank you! But sorry, I have no comment now. I’m too busy looking good,” he slurred back. Sorry! Don’t let me ruin your swag, tree!

So while Al Roker tries to get through another year of this dreadful event and explain to us who Big Time Rush is (no, really, who are they?!), know that the tree also wants Dec. 26 to arrive as quickly as possible.

And for those of you who feel compelled to point out that that’s Boxing Day, I say: Go climb a tree.