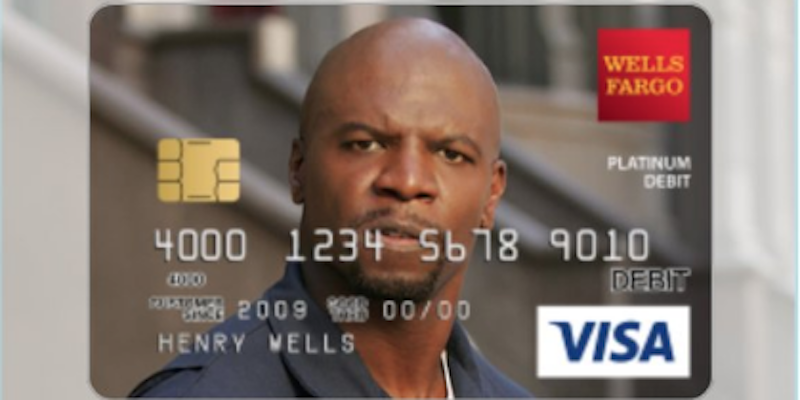 He will keep your spending in check.

One Terry Crews fan can sleep a little easier tonight after the  star cleared up a problem with her bank.

It all started last week when Darrell Kennedy tweeted a screenshot of a debit card she’d designed on the Wells Fargo website. The bank allows customers to upload personal images and use them as the background on their cards, so Kennedy opted for the face of a beloved celebrity.

In her mock-up, Crews’ face frowns in concern above the numbers as if to say, “Are you sure you wanna buy that?” which stems from an old Twitter meme.

Days later, she had bad news for her followers: the bank rejected her design.

“They rejected my request because they said I needed written approval from Terry Crews,” she explained. She asked people to retweet her in an attempt to get the actor’s attention. He got weird in those Old Spice commercials, so maybe he’d have a soft spot in his heart for her goofy cause.

It turns out he did. That same afternoon, Crews replied to Kennedy and gave her permission to use his image:

Now armed with Crews’ consent, Kennedy called up her bank to see if they’d accept. According to Kennedy, the tweet was more than sufficient.

“They’ve expedited the case and are sending it to Wells Fargo HQ to get it approved,” she explained. “Should have it in my hands in the next two weeks.”

UPDATE: They’ve expedited the case and are sending it to @WellsFargo HQ to get it approved. Should have it in my hands in the next two weeks pic.twitter.com/JlggkVPsof

This probably means more requests from fans trying to pull similar stunts in the coming weeks, but for the time being: a happy ending.