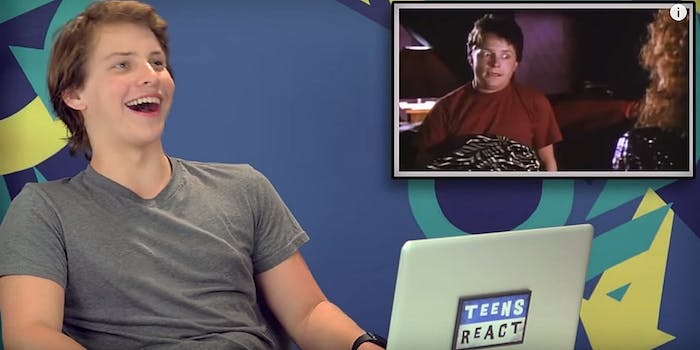 Wednesday is Back to the Future Day, when everyone lucky enough to live among the flying cars and holographic movie theaters of Hill Valley, California, hopes to meet the 1980s version of Michael J. Fox as he tries to save his future self while riding a hoverboard and fleeing Griff Tannen and his posse of futuristic hooligans.

To mark the occasion, the Fine Brothers gathered a bunch of teenagers and showed them clips from Back to the Future II to see what they thought of the moviemakers’ vision of the future.

To those of us who grew up in the 1980s and ’90s and who have loved the BttF franchise ever since, it’s actually pretty heartening to see that these whippersnappers have an appreciation for Doc Brown and Marty McFly and all the shenanigans that ensued between and because of them.

But perhaps the best reaction occurred when these two teens learned that  the movie takes place in the same year in which they’re currently living.

For those of us who remember seeing the Back to the Future trilogy in theaters, the above reaction feels all too familiar.