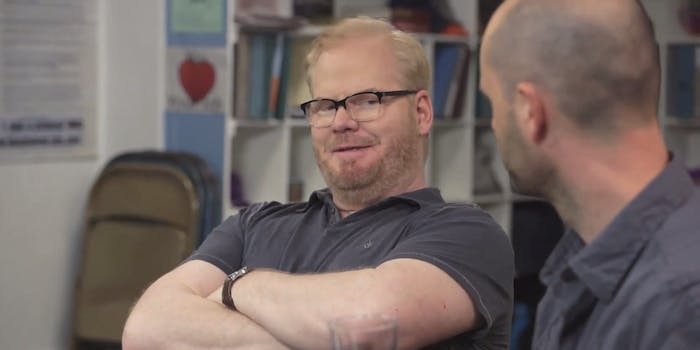 There’s no better way to get your webseries noticed than by filling it with stars.

There’s no better way to get your webseries noticed than by filling it with stars. Look no further than Messrs. Seinfeld and Buscemi to witness the value of fresh, weekly injections of comedic and dramatic known quantities.

Teachers Lounge (the apostrophe is purposely missing) wholeheartedly subscribes to this credo. After all, the creators Ted Alexandro and Hollis James have “a lot of comedian friends and they’re free during the day,” so why not use them? And so its upcoming episodes will feature comedians Lewis Black, Judah Friedlander, Judy Gold, musician Ted Leo, and Janeane Garofalo in a weekly speaking role.

But first up is Jim Gaffigan, who, like all the weekly guest stars, plays a faculty member who meets with Alexandro and James (the music teacher and janitor, respectively) in the teachers’ room at a NYC elementary school.

Gaffigan is predictably excellent as a nutrition teacher who tends his own vineyard (featuring “Chardo Grigio” and “Pinot Riesling” varietals) on the school grounds with the help of the students.

Character aside, he is given very little to work with, the episode taking the form of just one prolonged, six-minute gag. It’s wasteful in its repetition and makes you wish they’d made more of an effort to showcase their guest; even the intended spark of the episode’s denouement is out-of-character and forced (who, out of the blue, would say that a certain wine would “pair well with fried chicken”?)

The duo have three more episodes in the can, and now that they have just hit their $50,000 goal on Kickstarter, can film six more. On the evidence of this initial, mixed episode, it’s difficult to recommend Teachers Lounge as a webseries. But who knows? If they can call in favors with friends like Jim Gaffigan, they must have something going for them, so perhaps it’s worth sticking around at least for next week’s offering.