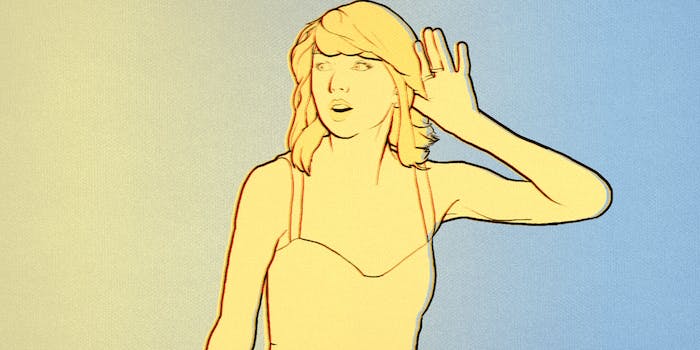 Her Swift skip-and-hair-flip is on point.

One Taylor Swift fan has some excellent suggestions for celebrity guests she should bring out at her upcoming concerts.

If you’ve ever been to a Swift concert, you might have experienced the parade of mostly white, very famous celebrities and models she trots out as a testament to how many besties she has. Podcaster and writer Lara Marie Schoenhals—co-author of White Girl Problems, a 2012 satire that started out as a tongue-in-cheek hashtag—went to Swift’s Santa Clara show over the weekend. The singer brought out Julia Roberts and Joan Baez, for some reason, and made them awkwardly dance to her music. She is the puppetmaster.

Tonight Joan Baez and Julia Roberts danced it out to ‘Style’. These two women are my heroes. What an honor. pic.twitter.com/ERFqo1SS8H

So Schoenhals created her own dream lineup of increasingly ridiculous celebrity cameos she’d like to see at Swift’s upcoming L.A. concerts. We’d kill to actually see Tonya Harding, Nancy Kerrigan, and the Blair Witch on stage with Tay Tay.