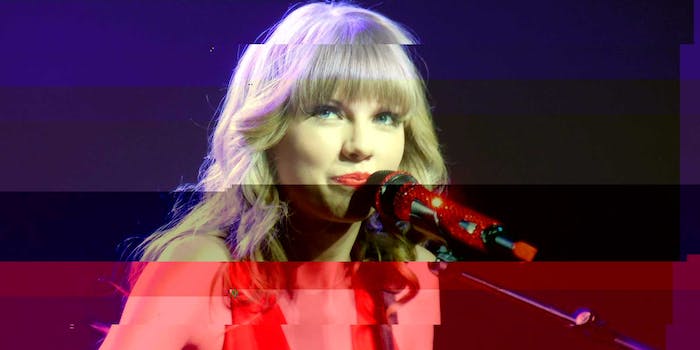 Photo via AZills/Flickr (CC BY 2.0) | Remix by Fernando Alfonso III

Whoops @taylorswift13 has been hacked lol fav for a follow … pic.twitter.com/73kW1rWEu3

Swift confirmed the hack via Tumblr and said that Twitter is actively working to shut down the attackers.

“My Twitter got hacked but don’t worry, Twitter is deleting the hacker tweets and locking my account until they can figure out how this happened and get me new passwords,” Swift (or a member of her team) wrote. “Never a dull moment.”

It’s not currently clear whether the hackers responsible for the Christmas Day attacks on Sony’s PlayStation Network (PSN) and Microsoft’s Xbox Live. But all signs point to yes.

A Twitter user going by the handle @Lizzard is promoting the attack, which appears to have been perpetrated by the person or people behind @notchf. Both accounts list affiliations to Lizard Squad in their Twitter bios.

The @notchf call for retweets from Swift’s account has already generated dozens of responses from people trying to get a fake shoutout from the pop star’s handle.

Update 1:20pm ET, Jan. 27: Swift’s Instagram account is back online. The account displays the same recent images as before it went offline, and no new images have been posted.

Update 3:30pm ET, Jan. 27: Twitter has suspended both @Lizzard and @notchF. Taylor Swift’s account, @taylorswift13, appears to be back in her control. She’s celebrating with some mocking tweets, and shot down allegations by @Lizzard that the hackers acquired nude photos of the singer during their hijinx.

I’d like to acknowledge the MVP of the day, @yelyahwilliams, for being the first to text me about the hack this morning. #FriendshipGoals

PS any hackers saying they have ‘nudes’? Psssh you’d love that wouldn’t you! Have fun photoshopping cause you got NOTHING.

Update 5:50pm ET, Jan. 27: The hackers managed to leak some of Swift’s Twitter DMs that, as Vulture reports, uphold her image as a genuinely nice person. Sorry, cynics.

Photo via AZills/Flickr (CC BY 2.0) | Remix by Fernando Alfonso III