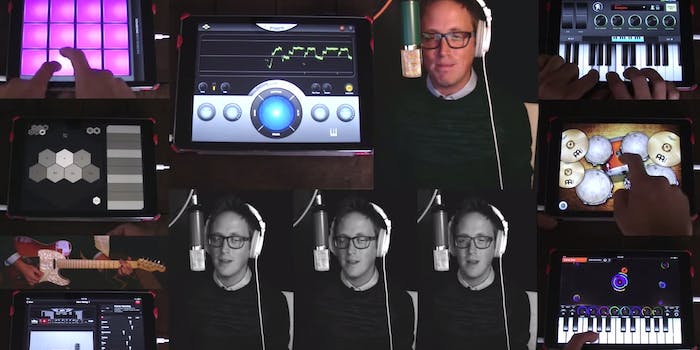 Taylor on a budget definitely works.

Taylor Swift contains multitudes. If that’s a sentiment you’re still unsure of, refer to the songstress’s music video for “Shake it Off” in which she showcases a range of personalities that spans from ballerina to B-girl and everyone in between.

But if you still need a little more convincing, refer to YouTuber Chase Holfedler’s take on Swift’s “Out of the Woods.” Holfedler was challenged by a friend “to cover a song using only free music apps on my iPad.” After choosing the singer’s latest 1989 single he went about recreating her new over-the-top pop sound by employing seven different free music apps including a drum machine, keyboard, and harmonizer.

His take was so original it even got a shout out on Twitter from Swift herself.

This Out Of The Woods cover is one of the coolest I’ve seen.. So interesting and so well done! https://t.co/EQ3o1R7mMv #8DaysTil1989

While it doesn’t have the soulful smoothness of Postmodern Jukebox’s “Shake It Off” cover, Holfelder’s cover just goes to show that good music doesn’t have to cost a cent.