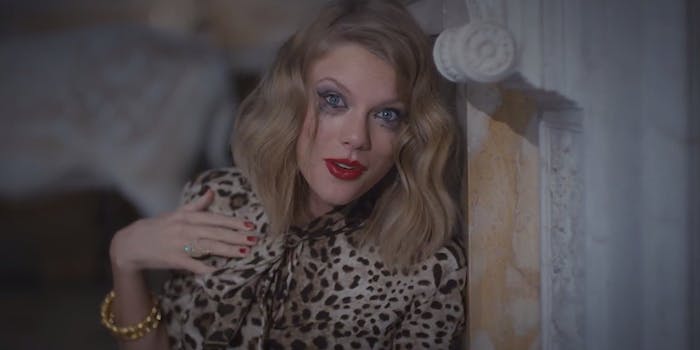 Swift embraces her Single White Female persona, then takes it to a whole new level.

In case her reputation or music hasn’t preceded her, sentient 1950s bathing suit Taylor Swift is known for being a bit boy crazy. It’s a persona the 1989 artist decided to take back with a bit of humor on her latest LP with “Blank Space.”

The track, which begins with a hypnotic beat and syncopated verse, quickly takes a turn for the sadistic as Taylor croons a deliciously deranged chorus with a wink to all the tabloid covers she’s appeared on. But never one to be satisfied with the bare minimum, Swift decided to antagonize the haters who are gonna hate, hate, hate with a music video for the track that makes her schizophrenic “Shake It Off” persona look well-adjusted.

After Yahoo! accidentally posted and then removed the video early Monday morning, Swift’s camp moved quickly to officially release “Blank Space” on Vevo by the afternoon. Though the official video, originally scheduled for Tuesday, is a bit different from its Yahoo! counterpart, the message is still the same: If you mess with Taylor’s heart, she will go full-fledged Single White Female on you.

Directed by Joseph Khan and featuring model Sean O’Pry as Swift’s latest lover-turned-victim, the “Blank Space” music video holds nothing back. Between stabbing cakes, setting fire to dress shirts, and bashing priceless antique automobiles with golf clubs, the video hits all the classic “nightmare dressed like a daydream” tropes.

For all those concerned, “No animals, trees, automobiles or actors were harmed in the making of this video,” the video explicitly states. But after seeing what Swift can do to a cake with a knife, I’d watch my back if I were the intern that goofed the posting in the first place.