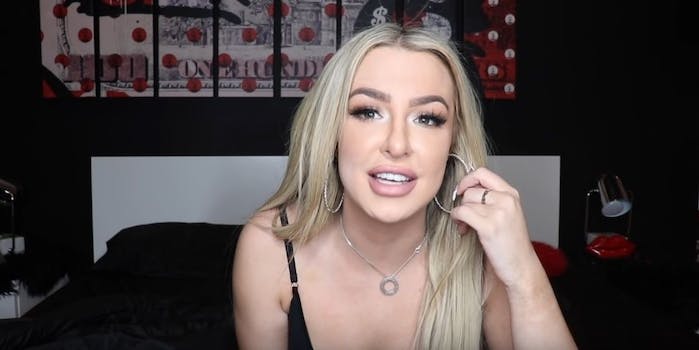 Yes, you can bet real money on who Tana Mongeau will date next

If you’d like to know how much the world of YouTube stars has influenced mainstream culture, note that YouTubers like Jake Paul, Logan Paul, and KSI are boxing professionally in front of tens of thousands of people. Lilly Singh is hosting a late-night talk show on network TV. And you can wager real money on fake YouTube relationships.

That’s where Tana Mongeau finds herself these days.

After an eight-month (so-called) relationship with Jake Paul that ended last month but was topped off by a (fake) wedding in Las Vegas, the online sportsbook MyBookie, via Sports Betting Dime, issued gambling odds for who Mongeau would date next.

She’s already been in high-profile relationships with rapper Lil Xan and social media star Bella Thorne. Now, there are predictions for who she’ll be romantically involved with next. They include David Dobrik, Logan Paul, and AnEsonGib—who will face Jake Paul in a boxing match on Jan. 30.

Dobrik is clearly the betting favorite with odds of the two getting together at  -300, meaning you’d have to wager $300 to win a $100 bet. The reason why the odds are so heavily weighted toward Dobrik? Because Mongeau has made it clear recently that the two are in contact.

She also retweeted this.

Still, if you do want to gamble on a Dobrik/Mongeau love connection, you might want to wait to see if the odds move in your favor. Otherwise, you can bet on the following social media stars for potential connections with Mongeau.

Considering the blowback Logan Paul received for his brief romantic dalliance with Alissa Violet, who formerly dated Jake Paul, it’s probably not advisable to put your money on him. KSI and AnEsonGib don’t live in the U.S. so that probably won’t help their causes in this case, either.

In fact, here are my own odds that Mongeau will one day procure a marriage certificate with any of the people listed above: Let’s call it, slim to none.