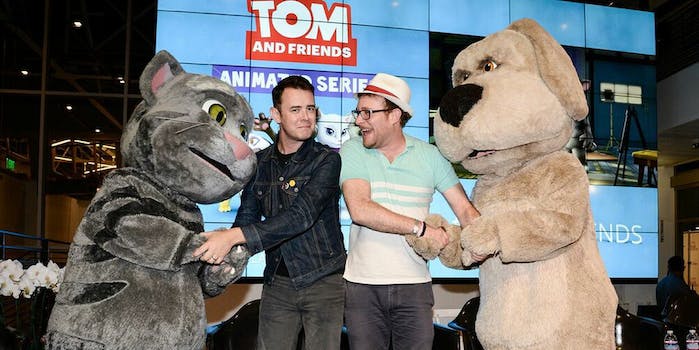 It's the role Colin Hanks was born to play.

An app franchise with more than 2.5 billion downloads is now headed for full-on YouTube series fame, and it all revolves around a talking cat.

Launched in 2010, the Talking Tom app lets users interact with an animated cat named Tom, getting him to repeat what you say as a chatbot. It’s been followed by a variety of apps—14 in all—that flesh out other characters and ways for users to interact with these creatures.

From the start, the apps have allowed users to generate their own videos of what they’re having Tom do, leading to numerous clips of the cat singing Lady Gaga and one with 17 million views that’s just called “the annoying song.” In fact, half the YouTube views of content featuring their characters are user-generated. That kind of popularity led Outfit7 Limited, the company behind Tom, to develop their own YouTube series about the cat and his cast of friends.

The series includes 52 11-minute episodes chronicling the life of Tom and his gang as they navigate the world of friendship, career, and much more. The first episode sets up Tom and his dog buddy Ben as app developers themselves, a pretty meta joke that might go over the heads of the youngest of fans. The show taps into voice talent from the likes Colin Hanks, Maria Bamford, and Lisa Schwartz, as well as Tom Kenny, most famous for being the voice of Spongebob Squarepants. The cast was on hand at the YouTube Space L.A. to celebrate the series premiere and answer some hard-hitting questions, like who Hanks took inspiration from in the role of Tom.

“I went to a hardcore meditation camp,” joked Hanks. “To prepare for the challenge it would be to be talking in a booth for a long time, but really more to find out what it’s like to be a talking cat, because we’ve seen so few of them in the wild.” He went on the seriously praise the writers and creators for the creation.

Creator Samo Login fielded questions about whether they have ambitions for Tom beyond YouTube.

“We want to bring Tom and his friends to as much media as possible,” he said. “YouTube was a natural choice for us. But every media is still a possibility.”

The first episode of the series has already generated more than 2.3 million views in just 24 hours.