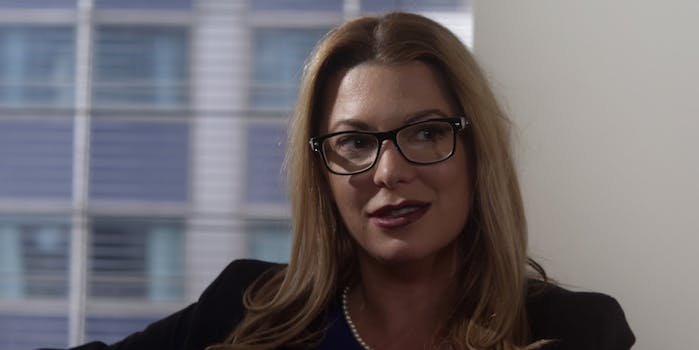 Women comprise only 7 percent of directors in the 250 top-grossing films of all time, according to a Variety study.

While Hollywood catches up, artists with a clear vision of the future are taking it upon themselves to do what they do best: Make a lean, mean, parody machine out of modern film’s propensity for dude-centric, straight, white casting.

In Swapped, the webseries created by Dana Faith Leonard, Zoe Samuel, and Mark Philip Lichtenstein, classic film scenes are re-staged with reversed gender roles. The team was sick of Hollywood’s lack of diversity, and did something about it.

In their first episode, they take the business card scene from American Psycho, and change the genders of all the people in the room. In the original, there are a bunch of white men, with No. 1 maniac Patrick Bateman (Christian Bale) front and center. In the Swapped version, we enter the mindscape of Patricia Bateman (Dani Faith Leonard), a modern-day corporate drone and sociopath. They are at each others’ throats in a way that feels more vicious and less dominating than the men in the original film. Cat fights and psychological manipulation come to mind rather than fall-down, manipulative physical matches. That’s a pretty gendered way to think about gender, however. It’s more complicated than that.

But showing just this one scene leads viewers to wonder about how the rest of the movie might’ve played out if it weren’t all about those straight, white guys. What would the characters be like in the rest of the film? How does the dynamic change when it’s all women versus all men?

For starters a woman will get to be more than a girlfriend, object of sexual desire, customer service representative, disciplinarian, or just one of the guys.

“The purpose in choosing the iconic American Psycho scene is to explore this sort of power—villainous but non-sexual,” Samuel tells the Daily Dot. “We think it’s fascinating to look at what’s different and what’s the same. We encourage our audience to join that conversation.”

The screenplay for American Psycho was written by Mary Harron and Guinevere Turner, and directed by Harron. It’s a male-driven story, but the film was controlled by women.

“The director [Harron] was very aware [of the dynamics of masculinity], which made it all the more fun to parody,” says Leonard.

Other films on the team’s list? Not so much. Some of their upcoming parodies include Die Hard, True Lies, and Jerry Maguire. The team is also asking viewers and people on social media to submit their suggestions for films they’d like to see get swapped.

“In True Lies, Jamie Lee strips for Schwarzenegger, but as she’s doing it she doesn’t know it’s him,” says Leonard. “It’s one of the rape-iest scenes out there. Will people be OK with it? Does what landed in the ’80s or ’90s still work today?”

That’s tough to say, because recent releases are just as unflinchingly static. And with every parody, Swapped makes Hollywood look not only behind the times, but bad at business.

“Women buy 50, 55 percent of movie tickets and watch more TV than men,” says Samuel. “How many tickets would women buy if [the entertainment industry] was really showing them what they wanted to see?”

Leonard, who is a comedian and also co-owns the film incubator Big Vision Empty Wallet, feels strongly about the need for diversity. Earlier this year, she launched Kickstart Diversity, a diversity program within her company that encourages the creation of more projects involving women, people of color, and LGBT filmmakers.

She says she’s hopeful for the future of film. But in the meantime, they have plenty to lampoon.