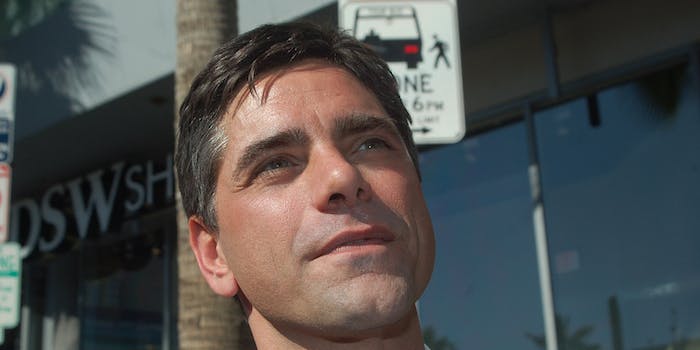 This charming webseries is about love, loyalty, and John Stamos

Stuck On A is kind of about stalking John Stamos, and kind of funny.

Is the idea of John Stamos inherently funny? The makers of webseries Stuck On A hope so. The success of their show hangs on it.

Stuck On A was brought to my attention by way of a tweet from Uncle Jesse himself. Whether he features later in the series remains to be seen but even without him it is decidedly Stamos-heavy. The plot hinges on his availability for a role that he is apparently perfect for; and one of the characters, obsessed with him, is anointed as the key to obtaining his services.

Immediately that premise creates problems. What type of role is Stamos—at the exclusion of all other actors—the most suitable candidate for? This is no slight on Stamos, who after the mega-fame of Full House has become a decent, jobbing actor who’s apparently still handsome, but he’s only a step above nondescript and is frankly interchangeable with a thousand other floating headshots.

You can understand where the makers of Stuck On A, Devin Compton and Patrick Daly, are coming from. Late ‘80s and early ‘90s pop culture is an easy, modern comedic trope—see “Don’t Hassel The Hoff” T-shirts and most VH1 programming. But the fact that most of the shirts now lie unsold in a warehouse speaks to this humor’s shelf life. Every generation seems to find 20-year-old stuff richly comedic. While just the mention of Stamos was funny in 2001’s Shallow Hal—the perfect girl being “kinda like Rebecca Romijn-Stamos, before she was Stamosed”—that comedic window has closed.

The show can still work because it’s charming. The first look at the obsessed fan’s home, adorned with a resplendent wall of Stamos pop art, looking down on us like a kaleidoscopic Dr. T.J. Eckleburg, is a witty twist on the stalker’s shrine. The show has a well-judged soundtrack. Yet it all revolves around a giant gaping hole: The core of the show’s humor is meant to be powered by the mere thought of Stamos. Don’t blame him though, he’s not even there. We can only hope he’ll show up in a later episode, playing the one part he’d be best at.

Photo via Sharon Graphics/Flickr (CC BY 2.0)