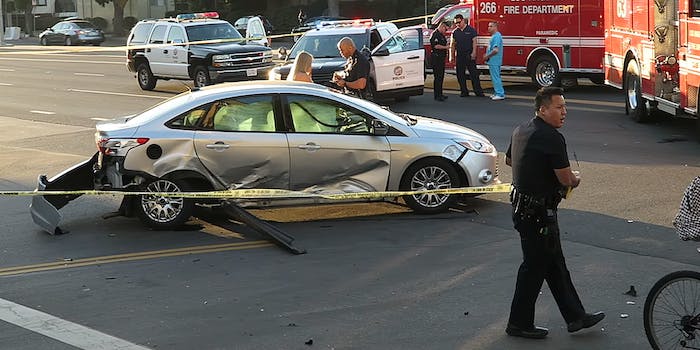 Adam Palya's been documenting the intersection for 2 years.

Adam Palya has been documenting a very dangerous intersection in Venice, California, for close to two years. His Stuck in Traffic series has captured white-knuckle U-turns, near collisions, and road rage at the intersection, which does not have a light.

Palya documents the aftermath of the accident in his latest video, but does not show the actual crash, which took place on Jan. 31 and involved a 36-year-old woman on a motorcycle colliding with a car. She was given CPR at the scene but did not survive.

Palya’s series attempts to take a humorous look at gridlock and poor city planning. He’s come up with his own slang and theories and gained a modest fanbase. Though he does often joke about the close calls he witnesses and the ridiculousness of the intersection, Palya says his goal has always been to “bring humor and awareness to the community and to continue to advocate for road safety.”

He was featured on a Fox 11 Los Angeles segment after the accident, and though he notes earlier in the clip that a right turn only sign was finally installed at the intersection, during his live interview you can see a driver blatantly ignoring the sign and crossing the intersection.

We’ve reached out to Palya to see if any major changes have been implemented since the crash.