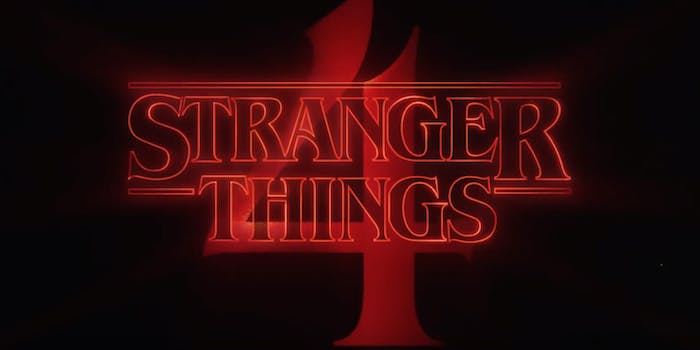 We're not in Hawkins anymore.

The good people of Hawkins will soon be subjected to even more supernatural torture, as Netflix announced the renewal of its hit series Stranger Things for a fourth season.

we're not in hawkins anymore pic.twitter.com/Y4hayuPKvu

The streaming giant also announced in a press release that it has signed show creators and showrunners the Duffer Brothers to a multi-year overall deal.

“The Duffer Brothers have captivated viewers around the world with Stranger Things, and we’re thrilled to expand our relationship with them to bring their vivid imaginations to other film and series projects our members will love,” said Netflix chief content officer Ted Sarandos. “We can’t wait to see what the Duffer Brothers have in store when they step outside the world of The Upside Down.”

Stranger Things season 4 rumors began circulating just a few weeks after the release of a successful third season that introduced new characters and storylines, including its first gay character. The show’s popularity made it an easy call for a re-up. Netflix, which rarely releases any watch data to the public, announced on July 8 that “40.7 million household accounts have been watching the show since its July 4 global launch.”

No release date has been announced for Stranger Things season 4.

The Duffer Brothers also commented on the new deal. “We are absolutely thrilled to continue our relationship with Netflix,” they affirmed in a joint statement. “Ted Sarandos, Cindy Holland, Brian Wright, and Matt Thunell took a huge chance on us, and our show—and forever changed our lives. From our first pitch meeting to the release of Stranger Things 3, the entire team at Netflix has been nothing short of sensational, providing us with the kind of support, guidance, and creative freedom we always dreamed about.

“We can’t wait to tell many more stories together—beginning, of course, with a return trip to Hawkins!”

The Stranger Things season 4 teaser, however, indicates a journey away from Hawkins (it literally ends with the message “We’re not in Hawkins anymore”), delving deeper into the Upside Down and perhaps another town altogether. In the last episode of season 3, Will (Noah Schnapp), Jonathan (Charlie Heaton), and their mother Joyce (Winona Ryder) are shown leaving Hawkins. But of course, getting away won’t be that easy.