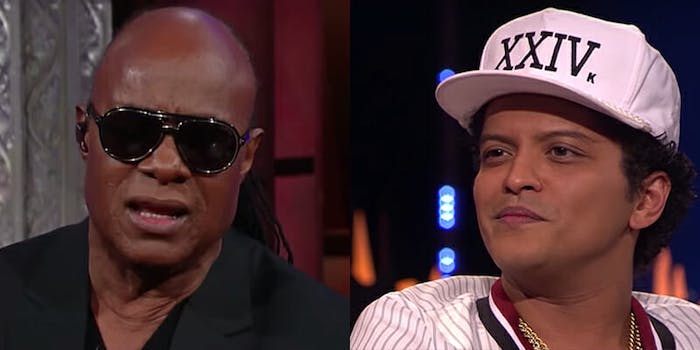 Last week, the internet was ignited in a debate over whether pop superstar Bruno Mars is a cultural appropriator of Black music. Now a legendary music icon is coming to his defense.

Stevie Wonder reportedly said the claim against Mars of cultural appropriation, which originated from a comment by activist and writer Seren Sensei on a web series called “The Grapevine,” is “bullshit.”

“[Mars is] a great talent, so all the other stuff is just bullshit,” Wonder told TMZ. “He was inspired by great musicians and great artists and songwriters. So it’s cool.”

Sensei had argued that Mars, whose mother is Filipino and his father Puerto Rican and Jewish, “takes pre-existing work and he just completely, word-for-word recreates it, extrapolates it.”

She critiqued what she sees as unoriginality in Mars’ songs, which are oftentimes based on forms historically found in African-American music, according to CNN.

Following her comments, Twitter erupted in a fierce argument over whether Mars propagates cultural appropriation, which is defined by the Cambridge Dictionary as “the act of taking or using things from a culture that is not your own, especially without showing that you understand or respect this culture.”

When asked by TMZ to weigh in on the debate, Wonder was adamant that he thinks Mars isn’t an offender.

“Here’s the thing, God created music for all of us to enjoy,” Wonder told TMZ. “So we cannot limit ourselves by people’s fears and insecurities.”