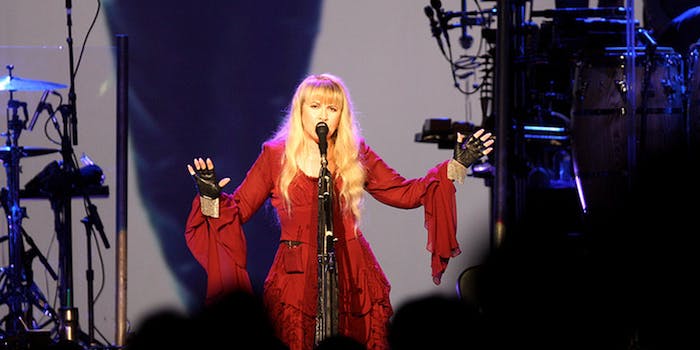 We've all gotten sucked into the Stevie Nicks YouTube vortex.

While some musicians might cringe at the thought of scrolling through their bootlegged or “lost” songs on YouTube, Stevie Nicks turned this contemporary process into a positive. In fact, she turned it into an entire album.

The Fleetwood Mac singer used YouTube to source material for her upcoming album, 24 Karat Gold: Songs From the Vault. And not just for a few songs—the whole album comprises re-recordings of obscure or bootlegged tracks.

The album’s title track has been circulating on YouTube for a few years and was originally recorded during the sessions for her 1981 solo album, Bella Donna. She recently re-recorded it, along with the album’s other songs, in Nashville. She told the Associated Press, “We went onto YouTube and we found all the songs that, somehow, were taken from my house or picked up or loaned out or whatever,” and added that some of the tracks dated back to 1969.

The Stevie Nicks YouTube vortex does hold some dark magic, so it’s not surprising that even Stevie Nicks was drawn into her own Stevie Nicks rabbit hole. If you really want to lose some time, watch this 1979 clip of Nicks and Fleetwood Mac’s Christine McVie attempting to wish Warner Bros. Records a happy birthday.

No word yet if the new album will feature any of her Game of Thrones poetry.