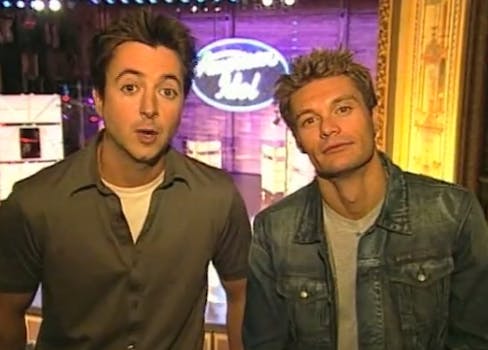 The one man who knows exactly how Steve Jones feels

Remember when "American Idol" was a buddy act? No, we don't either. But Brian Dunkleman can't forget.

Steve Jones, meet Brian Dunkleman. You two will have a lot to talk about.

Jones, who hosted the first season of Fox’s The X Factor, was dumped from the show Monday. He joins Dunkleman, whose one-season stint sharing the American Idol spotlight with Ryan Seacrest proved as forgettable as Chris Daughtry’s career.

Dunkleman, who is still alive and doing stand-up comedy gigs, has taken to his Twitter account, @briandunkleman. He’d like everyone to know he loves the comparisons.

His replies to fans who are nominating him to take Jones’s place on the show show off his self-deprecating wit.

We use the term “fans” loosely. As of Tuesday afternoon, he had fewer than 600 followers.

Even then, this is probably the most attention he’s received since being fired from Idol.

“The X Factor will be looking for a host. I think Brian Dunkleman is available,” a fan tweeted.

“Who told you?” Dunkleman tweeted back.

“So who was worse—Steve Jones or Brian Dunkleman?” tweeted @theidolguy.

Dunkleman responded, “Such a toss up!”

“@simoncowell I’m still available, but let me know soon … I’ll have to cancel some 4-figure stand up gigs,” Dunkleman tweeted at Cowell, the famous Idol judge and X Factor creator.

In conclusion? “Most fun I’ve had in a decade,” tweeted Dunkleman.

It would be sad if it weren’t so funny.