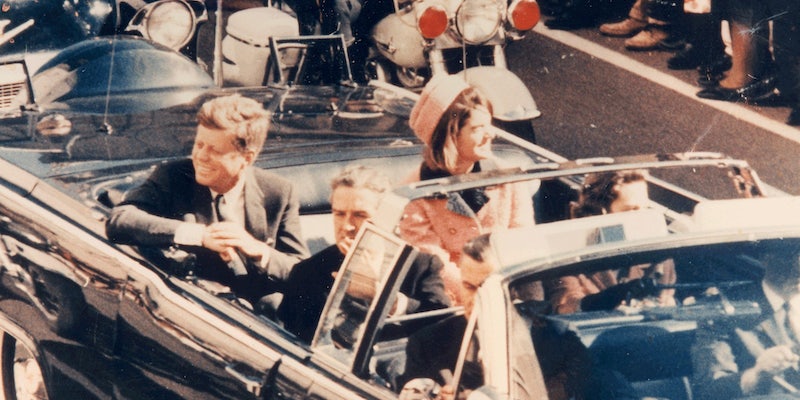 In its ongoing quest to deliver the type of high-end programming Netflix has offered, Hulu has stepped up to bring us the time travel/conspiracy thrill ride we didn’t know we were waiting for: an adaptation of Stephen King’s Kennedy assassination thriller 11/22/63.

Though the choice may seem an odd one—a 24-style string of attempts to stop JFK from driving past that grassy knoll seems a bit bland—the creative team behind the series is formidable: J.J. Abrams’ Bad Robot production company will be producing the series, with Bridget Carpenter, fresh from Sundance’s original series The Red Road, serving as writer and executive producer.

The story centers on an English teacher who abandons his modern life to travel back in time to attempt to stop the assassination of JFK. As often happens in time travel scenarios, things don’t exactly pan out as expected. Though the novel is a break away from King’s traditional horror, it was hailed as a success by critics. King said in a statement that he was looking forward to the adaptation:

If I ever wrote a book that cries out for long-form, event TV programming, 11/22/63 is it. I’m excited that it’s going to happen, and am looking forward to working with J.J. Abrams and the whole Bad Robot team.

Adapting a King novel is a safe bet for Hulu as it struggles to compete with Netflix’s original programming. King adaptations have always been a solid ratings win, from the early ratings grabs of mini-series like It and The Stand to the more recent wins. Bag of Bones, while critically panned, was a top ratings draw for cable network A&E in 2012, and Under the Dome continues to pull a hefty viewership for CBS.

Hulu’s adaptation will air in nine, hour-long episodes over a single season, though the concept could lend itself to further episodes.

“I’ve been a fan of Stephen King since I was in junior high school,” Abrams said. “The chance to work with him at all, let alone on a story so compelling, emotional and imaginative, is a dream. We are thrilled to be working with Hulu on this very special project.”