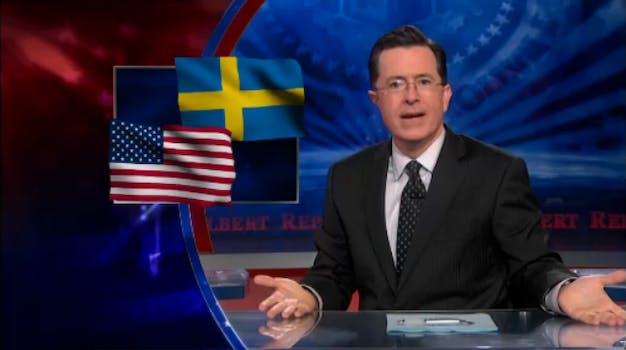 Last week, Stephen Colbert started Operation Artificial Swedener, a Twitter campaign to become the first non-Swedish citizen to take over the @sweden Twitter account for a week. The hashtag #ArticialSwedener had 1,580 mentions at its peak on June 12, according to statistics from Topsy, and it looked like Colbert’s plan was on its way to success.

“Not so fast, Colbert,” said Sweden.

Colbert announced on last night’s The Colbert Report that Sweden had responded to his campaign.

“People who are not Swedish citizens cannot take over the account, not yet anyway,” Swedish Institute Media Relations Manager Sergio Guimaraes said in a statement.

Naturally, Colbert replied to Guimaraes’s statement on his show.

“Your people clearly want me,” he said. “And you don’t have to worry about citizenship; I am a Swede. I mean, just check out the famous Swedish person page on Wikipedia.”

Colbert then edited the “List of Swedish people” page on Wikipedia so that he was listed as a famous Swedish actor. The page has been edited since last night’s show, and as of press time the page does not list Colbert.

“You see?” Colbert said. “Americans are starting to notice you. Soon, we may even be able to find you on the map.”