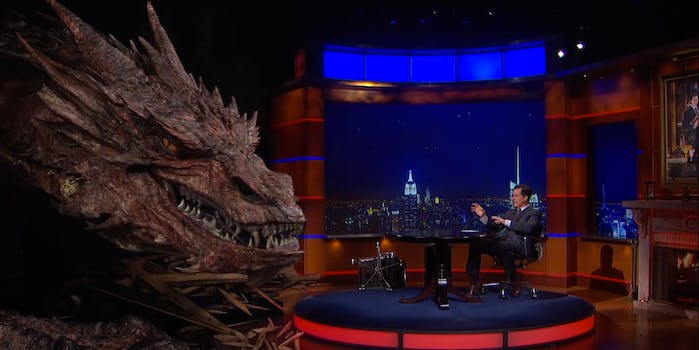 Stephen Colbert interviewed Smaug and it was glorious

Things are about to get heated.

The last great fire drake of the Third Age made quite the appearance on The Colbert Report—and he may have damaged half the studio in the process.

After teasing a “surprise guest” from The Hobbit: The Battle of the Five Armies, Stephen Colbert revealed that it was Smaug, the great and terrible, chiefest of calamities, visiting New York to promote the new Hobbit film with help from Benedict Cumberbatch and some impressive CGI. As you can imagine, the two fiscal conservatives got along famously—they shared a passion for sleeping on giant piles of money.

Having already eaten the ladies of The View, Smaug was more than willing to discuss his utter greatness while bemoaning the injustices directed at him because of “Hollywood liberal bias.” He was as slick as ever, with perfectly good explanations for why he attacked Bilbo Baggins and turned down a role in Sherlock.

Of course, the interview ended the same way most encounters with Smaug do: in flames. Hopefully those parts of the studio fans can bid on remain undamaged.

Smaug was an intimidating guest. Luckily I had a leftover black arrow from that time I interviewed Richard Branson.