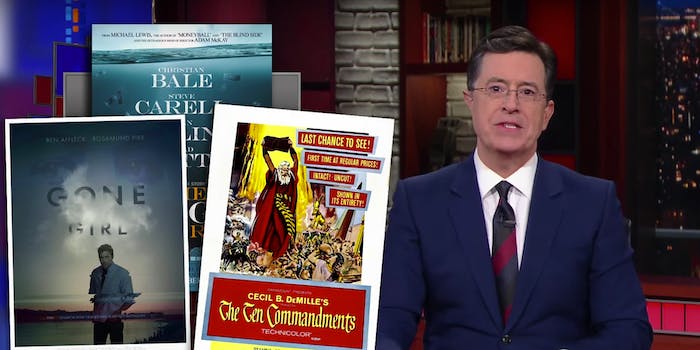 We'd browse through these categories.

Netflix’s secret categories offer a wealth of rabbit holes for TV and film buffs to travel down, but the most surprising thing about the categories is just how obscure they can get.

By entering a code, you can start browsing movies by genre, themes, decades, directors, or even a combination of them to get something like “Critically acclaimed Emotional Dramas from the 1980s.” On Tuesday’s Late Show, Stephen Colbert offered some obscure categories of his own to sort out his Netflix queue.

If he hadn’t said he’d made them up, we might have believed that they were real—because “Kurt Russell Tank Top Movies” and “Movies Without Any Dragons In Them” are pretty vital. Maybe they’ll in the next Netflix update.

Update 12:54pm CT, Jan. 26: Netflix has taken notice of Colbert’s segment and rewarded its users with a new category.