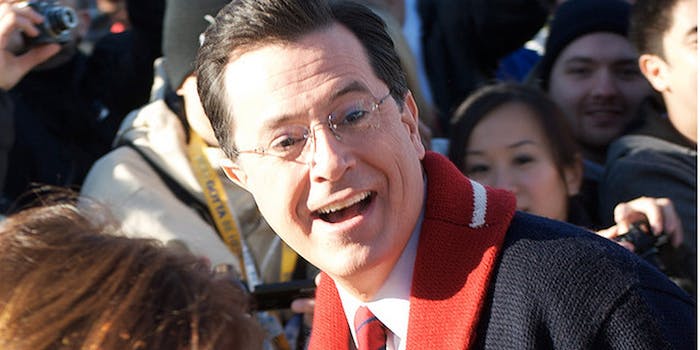 Returning to his desk Wednesday night, Colbert paid tribute to his mom in a moving, sweet, and funny segment.

Stephen Colbert took a week off his Comedy Central show to be with his dying mother, Lorna Tuck Colbert, (pronounced Cole-bert) who passed last week at age 92. Returning to his desk Wednesday night, Colbert paid tribute to his mom in a moving, sweet, and funny segment.

The TV host, barely able to hold back tears, explained how anyone who is a fan of his show, and of him, has his mother to thank for that. He told how his parents met, when his mother was 12, at a cotillion and how they had 11 children together.

Colbert’s father and two of his teenage brothers died in a plane crash when Colbert was only 10, and in the segment Colbert stresses his mother’s strength in dealing with tragedy and loss with faith in God and gratitude.

The famous Stephen Colbert character—that clueless, blowhard conservative pundit he plays on TV—is obviously not the man himself. Colbert the person is a Christian who teaches Sunday school at his New Jersey parish when he has the time to. In his eulogy last night, he talked of the German prayer his mother would say to her eldest children when she tucked them in at night.

When Colbert breaks character, it is rare and so the public loves it. He did it to help his sister’s congressional bid and to teach James Franco a little something-something about J.R.R. Tolkien’s Silmarillion, a topic the real Colbert knows an exceptional amount about.

Sometimes he just can’t contain himself.

And, thanks to YouTube, we get a rare backstage pass when Colbert meets John Kerry:

The “real” Colbert on Meet the Press:

This tribute to his mother was touching, grateful, and tinged with the perfectly placed humor Colbert is so well known for.

The interviewer asks her, “Do they think this is his persona?” She replies, “Gosh, I hope not.”