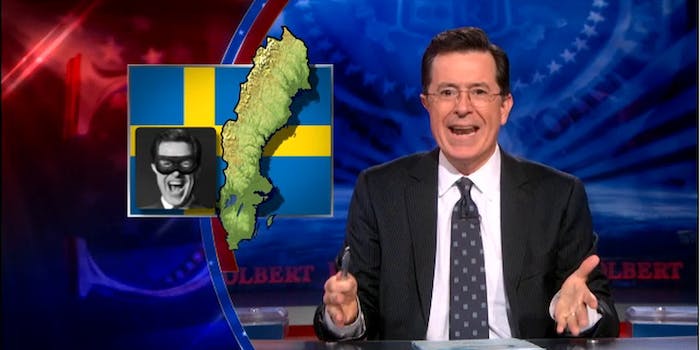 Colbert thinks he can do better. Who could argue?

Colbert announced Operation Artificial Swedener on last night’s The Colbert Report. He wants to become the first non-Swedish citizen to take over the @sweden Twitter account for a week. The campaign comes after the latest guest tweeter, Sonja Abrahamsson, attracted attention for her odd jokes on the feed.

Colbert cited his number of Twitter followers as a qualification for the job.

“The @sweden account has only 33,000 followers, whereas I have 3.5 million,” Colbert said. “Mathematically, I am 100 times more prepared for this than the entire nation of Sweden.”

Abrahamsson is in support of Colbert’s takeover.

“If @StephenAtHome ever tweets for @sweden, he should come live with me for that entire week. Livin da Sonja Sweden Life,” she tweeted earlier this morning.

Colbert is encouraging fans and viewers to nominate him by using the hashtag #artificalSwedener and to email [email protected].

Photo via The Colbert Report