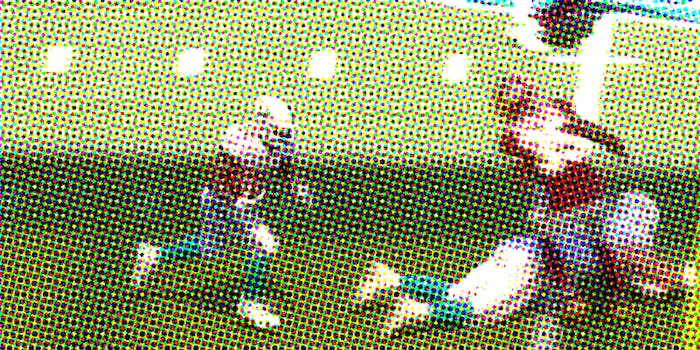 At the halfway point of the fantasy season, it's time to get weird.

We’ve reached the halfway point to the fantasy football season. By now I’ve all but decided to never do this again. I’m tired of wasting my time on this nonsense. Tired of guessing wrong and losing to teams who start the Baltimore defense on the road against Seattle when Virgin Wilson throws his first pick of the year. And it goes for six. Tired of the constant pain of deciding between flex options like Duke Johnson and Mark Walton and Chase Edmonds.

Oh, wait, we found a breakout running back deep into the waiver-wire season. At last. Though beware because the Saints haven’t given up a 100-yard rusher in 29 games—and they’re Edmonds’ next opponents.

But if you got him, you’re starting him. And anyway if you’re playing against Aaron Rodgers what’s really the point of even checking the scores?

Fantasy is supposed to be a distraction from the chaos of the world. Instead by this time of the year, it merges with the chaos and emboldens it. The best way to remedy the helplessness is to make trades. Nothing offsets chaos like believing we can control it. Sometimes we are at the mercy of the fates. Sometimes it will feel as if we are supposed to lose. At those times we need to remind ourselves that the tide will turn and when it does the ride will again be glorious.

That is a speech to my 1-6 team anchored by top-three picks Davante Adams, Mike Evans, and Stefon Diggs, henceforth known as “DED.”

But if you’re in the hunt that means it’s high time to find the haymaker and go get him. Find the one guy who is going to bring you the championship you deserve. Then for a brief moment, in the vast space of eternity, you will feel as if you tamed the chaos.

Last week’s Allan Lazard-mania turned out sloppier than Jerry Jones on Bourbon Street. Lazard might retain value, but you’ll be guessing wrong on the weeks he actually comes through. And you don’t need another Demarcus Robinson or Will Fuller on your bench.

Which is a perfect segue to the pickup of the week, Kenny Stills. Targets are about to flow to him in an offense that hits really high notes from time-to-time. Speaking of getting high, here’s your Week 8 smoke ’em, pass ’em.

Derek Carr at Houston: Oakland will have played five consecutive road games after this tilt. Al Davis would be ashamed of this team’s inability to chuck it deep. Carr has yet to throw for 300 yards but he’s thrown two TDs passes in three of four. Enjoy the icy mediocrity like rubbing your face on the marble slate of Davis’ mausoleum.

Ryan Tannehill vs. Tampa Bay: Do you remember Week 16, 2014? I do. I had Tannehill on one ragtag group of bums who had slipped their way into the playoffs and decided to make a brave run. He will always be special to me. Play it again, Ryan. For old time’s sake.

Mark Walton at Pittsburgh: There are rumblings that the Drake might get moved before the trade deadline. But if the carries continue to bend as they are, who cares? This appears to be Walton’s job. Pittsburgh hasn’t surrendered a 100-yard rusher yet this season. But any RB getting 15 touches is practically an auto-start. And who doesn’t want an unknown talent on the worst team in the league? Even if you shy away this weekend, he has the New York Giants and Cincinnati Bengals Weeks 15 and 16. Cincinnati would have the added narrative of a revenge game. Have you ever read The Count of Monte Cristo? It’s about revenge and it’s tremendous: “All human wisdom is contained in these two words: wait and hope.”

Darrell Henderson vs. Cincinnati: Henderson is coming off an underwhelming performance of 11 for 31. But I’ll take a shot at 11 touches against a team surrendering 189 yards a game on the ground. Outside of the San Francisco game, the Rams haven’t had trouble scoring points. If they get out early, they could control the clock. This is another guy I’d target. Gurley has had trouble staying healthy and Henderson is a lottery ticket. If I win the lottery I’m buying the Bengals and rehiring Marv Lewis. Make the Bengals Watchable Again.

D.J. Chark vs. New York Jets: He’s been in bad spots for the last two weeks. Marcus Lattimore sealed him up against New Orleans and game flow hurt him in the win against Cincinnati. The Jets are on a short week after having no answers for New England. There’s blood in the water. D… J… Chark doo-doo doo doo doo doo.

Robby Anderson at Jacksonville: The Jets will inevitably be behind and hopefully Sam Darnold has a little more space to throw. The Jets should have to play the rest of their games in Moscow to crowds on a steady diet of vodka and week-old borscht. And after each game, the team has to fight their way out of the stadium. At least there’d be some entertainment in this scenario.

Josh Hill vs. Arizona: Operating on the assumption Jared Cook can’t go, this seems like a must-start. Outside of Evan Engram last weekend (and Rhett Ellison did get in the end zone), this defense has struggled against the position. Join the parade.

Ricky Seals-Jones at New England: It could’ve been game-plan, but at a thin position it’s worth a stab. Though this is a tough spot against a historically great defense. What is happening with the Pats on D? Can someone explain this? And I don’t mean with Xs and Os or personnel evaluation. I mean truly explain how it can be this lopsided. Years from now I think we will find out some of these players are actual droids. They’re unstoppable. Sound familiar?

Case Keenum at Minnesota: He’s gonna suit up they say. It could be tempting from a garbage-collecting standpoint. But he’s more likely to suffocate himself with the plastic bag.

Carson Wentz at Buffalo: Since the Green Bay game three weeks ago he’s been forgettable. Besides last week, Buffalo hasn’t given up more than 240 yards passing in a game. If Philly fans think they are restless after the Dallas whopping this game is gonna be like mainlining Ambien.

Joe Mixon at Los Angeles Rams: Many of the top RBs have been solid performers, but Mixon isn’t one of them. Even PPR can’t save him. He’s stuck in the Dalton Zone, a hole deeper and more depraved than Darnold Hole.

Derrick Henry vs. Tampa Bay: The hunch is the bye week didn’t help Tampa correct its league-worst passing defense. Some teams are RB-rich so benching Henry might be a decision for some folks. These teams with multiple RB options ride on the backs of unicorns, sip the best Scotch, and smoke the best grass.

Allen Robinson vs. Los Angeles Chargers: I’m tired, everyone. My son turned 2 over the weekend. Then we went to the ER on his birthday because he had some breathing problems. They figured it out thankfully. We are very lucky to have incredible insurance through my wife’s work. I think about how lucky I am all the time. The opposite of my luck is Allen Robinson having to play with Blake Bortles and Mitch Trubisky.

Carolina Panthers WRs at San Francisco: This defense has been setting up tent cities in every backfield they play. Kyle Allen’s blowup against Arizona was three weeks ago but it feels like three months. This is a situation best to be avoided.

O.J. Howard at Tennessee: I want you to act like his name wasn’t even here. Let’s act as if it never even happened.