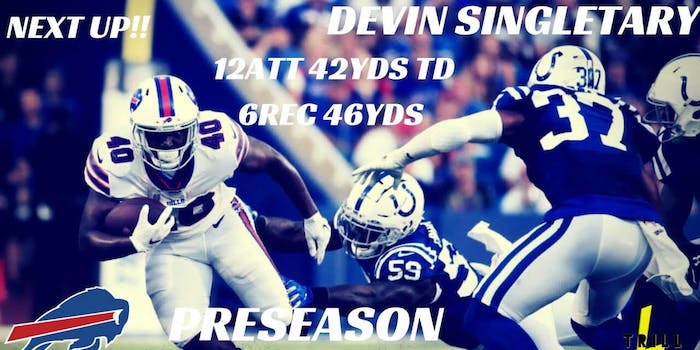 The moment we think we know something is the same moment we need to remind ourselves we don't.

This week Jacoby Brissett was on a bye. I was forced to start a wire quarterback. Normally I look for the safest play. Someone at home preferably against a mediocre defense. Like for instance a QB who has thrown for nine TDs and just one pick on the year. A QB at home against a team giving up the second-most points to opposing QBs in all of football—and 400-plus yards of offense on average when on the road.

Unfortunately, I went with Gardner Minshew and he was terrible.

Minshew mightn’t have been the play in retrospect. I’m willing to admit when I’m wrong. There were other options.

Andy Dalton in Baltimore? I wanted at least some upside.

Marcus Mariota at Denver? You know how bad you have to be to get benched for Ryan Tannehill?

Kirk Cousins vs. Philly? He proved to be the useful wire play, sure, but what I really want you to remember is how fragile your decisions are. The moment we think we know something is the same moment we need to remind ourselves we don’t. What was it Plato said? This I know, I know I hate Kirk Cousins.

With that in mind: Your pickup of the week has to be Chase Edmonds if he’s somehow still available. Don’t be afraid to snatch up Darrell Henderson if he’s lurking around. He had burst and flashed some great vision hitting the holes against a very good Niners team. It was overshadowed by a fumble and getting drubbed, but he might’ve earned himself more touches going forward.

Pack it up, pack it in, and pass it around. Here’s your Week 7 edition of Smoke ’em, Pass ’em.

Jacoby Brissett vs. Houston: Fresh off a bye he’s at home against a team that’s surrendering 268 yards per game through the air. Houston has scored 84 in its last two. And when asked to throw Brissett has been solid, posting big numbers against Atlanta and Oakland. They used Marlon Mack to bully Kansas City, but the hope is there’s a shootout.

Jacoby Brissett and Jimmy Garoppolo, both former Patriots backups, are a combined 8-2. I think we can all agree this proves Tom Brady is a system QB.

Gardner Minshew at Cincinnati: When he pulled his sword out this week he hacked off half his mustache. But nothing says rebound like a trip to Cincinnati. The Bengals are giving up a generous 426 yards of offense per game. Get in line for mustache rides.

Joe Flacco vs. Kansas City: If the Broncos have any chance in this one, they’ll have to throw the ball. Truly a wild card and a desperation play but some of these waiver wires are thinner than Tony Dungy’s neck. And if you’ve been rolling out Jameis Winston or Baker Mayfield, welcome to hell. The devil has John Elway’s smile and the mediocrity is a mile high.

David Montgomery vs. New Orleans: The snap rates are there. The opportunity is rising with no other playmakers on this offense. The numbers just aren’t adding up. But this is a good spot for him. As we know the Saints have been, until most recently, brutal on the road. Something has to give here. Or maybe this offense is doomed to never be right, which is ironic because Mitch Trubisky can’t go left either.

Devin Singletary vs. Miami: Frank Gore isn’t going away any time soon. But Singletary’s hamstring is hopefully healthy out of the bye. In the first two games, he looked elusive and explosive. Something this offense will need going forward. And the schedule is more luscious than Lamar Jackson over the next five: Miami, Philly, Washington, Cleveland, Miami. It sounds like a Robert Kraft sex tour.

Calvin Ridley vs. Los Angeles Rams: The Falcons have scored 65 points in their last two though they’ve lost both. Ridley has 15 targets in his last two. The trend should continue here against a Rams team sliding down the wrong side of the Sisyphean Hill. The boulder eternally rolling away from them, no hope in ascension, no chance of ever reaching the top. For wasn’t Sisyphus lucky, as Camus said. He could work. He was outside. Or is that the great fallacy? They want you to push rocks. I don’t know. These lonely and dark thoughts are all inspired by both these teams.

“In order to understand the world, one has to turn away from it on occasion,” Camus wrote. So I tell Falcons and Rams fans, turn away.

Christian Kirk at New York Giants: He was close to returning last weekend. Kyler Murray would’ve been listed above, but he’s a no-brainer start week-to-week now. And the Giants, though poised to get Saquon Barkley and Evan Engram back, can’t stop anyone. This Giants team from a fantasy perspective might be fun going forward. Golden Tate, Engram, and Bark is a fun trio if Danny Dimes is even worth a nickel.

Gerald Everett at Atlanta: Blew all your FAAB on him like an idiot and didn’t get what you paid for? Take heart. His five targets in the drubbing against San Fran were second behind Cooper Kupp. Roll him out now and get ready for a smoother ride going forward. Bengals, Steelers, Bears, Ravens, drum roll, Arizona. If the targets continue and he stays healthy the FAAB you spent will be well worth it. Now if he lays an egg in this one, you need to reevaluate the way you spend money. This was a speech to myself.

Jack Doyle vs Houston: He has had only one game of four or more targets. But the hope here is volume in a game we hope produces points. Houston has been one of the best against tight ends, but Hooper (6-56) and Kelce (4-58) are better than most of what you get at this position. And, of course, this could be a stinker. Remember we hoped for points in the Indy-K.C. game, too.

This game is like when your dad promises you all week that he will play catch with you on Sunday, which is also Christmas day, but then he drinks too much Jameson and passes out under the tree.

Kirk Cousins at Detroit Have I learned nothing? Maybe I don’t want to learn anything. Maybe you should leave me alone and get off my doorstep because I ain’t buying even if I had the money to.

Philip Rivers at Tennessee: What do you get now, about one out of four good starts from Phil? That’s a 25% chance, which is 75% less than the odds of him having another child.

Carlos Hyde at Indianapolis: I don’t give two Bud Adams’ flyin’ birds if Hyde rushes for 26-116-1 every week for the rest of the year. I’m done writing his name. I won’t let him hurt me anymore. I am turning away. You can find me late at night, in the darkest corners of your city, drunk, outside your favorite pub. I’ll be reciting Camus essays to whoever needs to hear them.

Sony Michel at New York Jets: He had 24 touches and 113 yards but didn’t score against the Giants. But the Jets will not be nearly as terrible as Week 3 when Luke Falk was under center. They have been lowkey solid against the run, allowing only two 100-yard rushers this season and only 68 in the first meeting. You’re playing with fire with this New England backfield. Do you like danger? Huh? You wanna chase the dragon? You should trade for David Montgomery.

Preston Williams at Buffalo: The Bills are giving up 187 ypg through the air, second only to the Patriots. Williams might be better off with Rosen, but for now, this whole mess should be avoided.

SF WRs at Washington: There’s a temptation to roster Dante Pettis moving forward. But for now this looks like a murky committee and this looks like a terrible spot for any of them. Washington is giving up 134 a game on the ground. San Fran should far exceed those numbers.

Chris Herndon at New England: He’s cleared and ready for takeoff. But there’s a delay. I want no part of facing this defense until they come back down to earth. But judging by the good Lord’s faith and love for Tom Brady and the Patriots, don’t hold your breath.