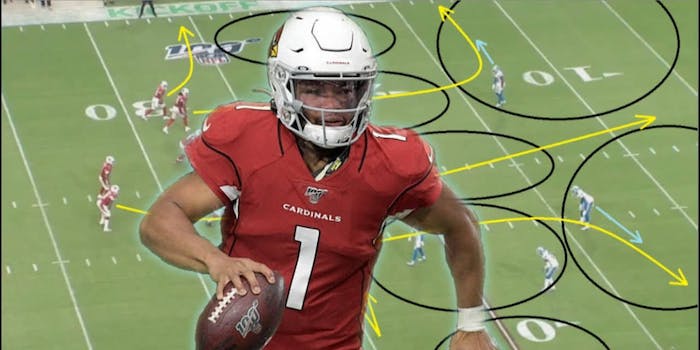 It's time for a little Kyler Murray on the side.

Last Thursday the Green Bay Packers defense was exposed by Carson Wentz and the Philadelphia Eagles. They were gashed for 34 points at home. It’s never a good sign to end the first quarter of the NFL season by getting slapped in the face at home. But Green Bay’s been flirting with complete mediocrity for a long time. An old QB with a lack of elite talent around him mightn’t end well.

But the more alarming part was Philly defensive end Derek Barnett’s spearing of Jamaal Williams in the first quarter. Williams was erect, his forward progress stifled by two players, when Barnett launched himself headfirst into the defenseless Williams.

You can watch the replay and tell yourself that it’s “just football,” as Barnett said afterward, but it’s time to adjust the approach to the game.

It’s embedded in the culture. Defensive players from Pop Warner right on up are taught to see the blood in the water and dive in. I remember the football drill that had you lay on your back, crown of helmet to another kid’s crown. The coach held the ball above and then dropped it into one of our arms. Then we jumped up. That’s when the magic happened. I remember doing this drill as an 8-year-old all the way until my senior year of high school. I was too stoned at college to remember if we ever did it there.

It’s unsurprising to hear offensive players echo Barnett. The brainwashing, which is perhaps the word’s most literal usage here, begins long before the NFL. See blood and dive. The argument, of course, is if they make such hits a major violation, does it affect the way the game is played? If you can’t hit each other is it even football?

“That’s what’s wrong with the world, everyone is too soft! This is football! Not ballet!” The shirtless fan screamed with bloodshot eyes and drool dripping down their chin.

But what’s better? Players strapped to wooden boards and waiting for reports about whether they are moving their extremities? Who do you want to watch play? Josh Allen or Matt Barkley? Deshaun Watson or AJ McCarron? Case Keenum or Dwayne Haskins? Well, the equation doesn’t always work, but you get the idea. Hell, I’ve gone so far as to say it should be illegal to touch quarterbacks if they are behind the line of scrimmage.

I think you shouldn’t be able to touch a quarterback unless they’re over the line of scrimmage.

I want to see great players do great things. I don’t think you need to spear in order to be successful.

It appears Williams will be OK. And that’s great. But the NFL is playing with fire by not sending a message to these types of players. It’s trash. Anyone who thinks otherwise is stupid or an Eagles fan, which a lot of people might think is redundant.

But here I am. Writing about this nonsense. So enough with the hyperbolic hypocrisy.

Let’s get into the fantasy football pickup of the week, which I guess is Jordan Wilkins. Indy’s Marlon Mack appears to be OK, but it’s a reminder to cover bases. Chris Herndon and Golden Tate are both off suspension this week for those who need help. I’m watching this Steelers game and Jaylen Samuels has looked great. But that could be more Cinci than him. It’s a thin week, but what do you expect when you got Priest Holmes, er, Darrel Williams last week.

As for who we’re starting this weekend, let’s pack the bowl and smoke ‘em, pass ‘em in Week 5.

Kyler Murray at Cincinnati: Murray was 22 of 32 for 241 and an interception but came up short against Seattle. He did, however, have a rushing TD with 4-27 on the ground. If he gets down early to Cinci there could be a similar line. All we need is a TD pass to make this a quality streamer. I did watch some of that contest and his constant dumping off to David Johnson was maddening.

Jacoby Brissett at Kansas City: He had another great start with 265 and three. And this time without top target, T.Y. Hilton. This guy is going to hang numbers in the right matchups. And this is the right matchup. Kansas City is so suspect on D Matt Stafford and his gimpy hip threw for 291 and three. In fact, if you read last week, I told you to start the Staff infection. (Speaking of staph infections, I also told you to sit Jameis Winston. Let’s call it a wash.)

Jameis Winston winning on the road against the Rams is all the proof we need to prove climate change is real.

Matt Breida vs. Cleveland: Out of the bye and ready to mingle. He continues to be the most electric player in that backfield. And they’ve been moving and run a metric shit-ton of plays. Breida should have plenty of chances to get funky.

David Montgomery at Oakland: Oakland has proven it can move the ball, but it hasn’t been tested like this. London games are always like a plate of soggy fish and chips washed down with warm beer. And the Bears gave Montgomery 21 carries against a solid Minnesota defensive performance. Pass the vinegar to hide the taste of this British delicacy.

Marquez Valdes-Scantling at Dallas: He was able to haul in 3-47 in an underwhelming performance against Philly. The Green Bay D made Jordan Howard look like Gale Sayers so Zeke Elliott should feast. The absence of Tyron Smith shouldn’t matter. And with the Packers down by 20 in the fourth quarter they’ll open up the offense a little bit and Rodgers can bring them inside the 10 down six with less than a minute to go. And he can throw a pick. But hopefully, MVS will finish with 7-78-1.

Alshon Jeffery v. New York Jets: He’s seen 16 targets in the two games he’s played. He’s caught just eight of them. If this were roulette now would be the time to bet on 17. Roulette is a fun game until you realize the spinning wheel is a metaphor and you are the ball in the never-changing, never-ceasing hell of the spinning world. And it will continue to spin, forever mocking you, long after you are dead. But Dostoyevsky vibes aside, this seems like a decent spot for Alshon Jeffery.

Tyler Boyd vs. Arizona: It’s been a rollercoaster so far for the new-look Bengals. And we’re plummeting downward right now. But Boyd gets a juicy matchup against an Arizona team not really concerned with stopping anyone. They’re like the opposite of small-town cops. With John Ross lost for the year, it’s time for Boyd and maybe even a little Tyler Eifert if you need a tight end.

Andy Dalton is the guy at a four-way stop that waves three or four cars through the intersection before he finally turns left without ever having turned his signal on.

Will Dissly at Los Angeles: How many times can we go back to the same well? We should never ask this question. Instead, walk to the well with confidence, a blind devotion so powerful we believe we control the supply. You must, how should I say, will the water into your bucket. Also, did you know Dissly was a defensive end at college until he moved to tight end his junior year? The more you know, the less it helps because nothing makes sense.

Philadelphia vs. New York Jets: This Jets team is out of a bye and ready to get waxed. Philly was downshifted into two gears higher than Green Bay. And since that was a Thursday game, they’re almost as rested as the Jets. And if the NFL lets Philly continue to play dirty there’s no telling the heights these Eagles can reach.

Mason Randolph vs. Baltimore: It’s early in his career and I don’t know beans from buckshot (I literally don’t know what buckshot is) so maybe Rudolph will be a star. Cincinnati made him look that way. But after Baltimore gets ahold of him his best comp will be Bubby Brister.

Daniel Jones vs. Minnesota: He didn’t have to do much because the Gallcow found the end zone twice. They probably won’t ask him to do a lot in this one. And Minnesota has been solid against the pass.

Leonard Fournette at Carolina: 29-225. He’s dominating snaps. But let’s not get ahead of ourselves. Before this performance, he had yet to crack 70 yards. Carolina hasn’t been great against the run, you say? Maybe chase the snaps. But sometimes the snaps you chase end up chasing you. Aristotle said that.

Carlos Hyde at Atlanta: How long are we gonna watch this dog smear its ass on the living room rug? Do they purposely want to run the slowest players out there? 12 carries for 58 yards. But 23 were on one carry. He had 11 for 33. Bill O’Brien is Alfred Prufrock but instead of using coffee spoons he measures out his life in shitty dive plays to Carlos Hyde. Punt this entire scam right into the Gulf of Mexico.

Pasted into Google translate: "We wasted a third round pick on Duke Johnson." https://t.co/QlHt58HRXz

Terry McLaurin vs. New England: Even if the hamstring is 100% this seems like a bad spot for F1. Did you know they designed a McLaren named after Ayrton Senna? If you’ve never seen the documentary Senna logoff right now and go remedy that.

Jimmy Graham should’ve caught that, spiked it, and then announced his retirement.

Green Bay at Dallas: This Dallas franchise has historically owned Green Bay at home. I’m superstitious this way. That place was kryptonite for Brett Favre. It was like the turf was made out of whatever is the direct opposite of Vicodin. Welcome back to mediocrity, Green Bay.