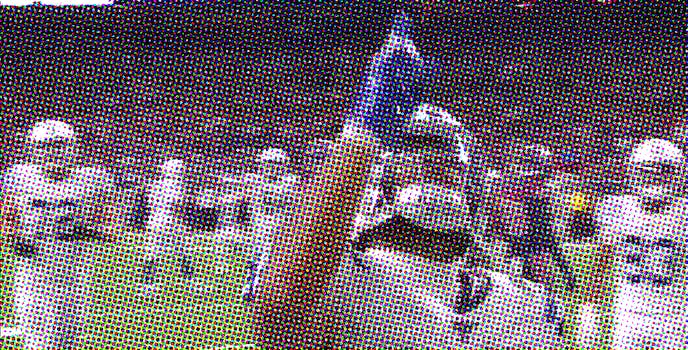 Welcome to your postseason push.

If you’re reading this you are either in the playoffs, vying for the playoffs, or are in sincere need of new hobbies. As we established last week, fantasy is a fruitless search for meaning where none exists. But here we are. We made it. I have four teams. Three of them are money leagues and the last is our Daily Dot league. They pay me for this nonsense, which is probably—miraculously—sadder than you reading this. Anyway, I’m in the playoffs in three of four. In one I have Lamar Jackson, Aaron Jones, Zeke, Jonathan Williams (it is happening), OBJ, Chark, and Hollister. If I can’t win anything in that league, why play?

This is the second-most fun time of year for fantasy besides the draft. There’s a brief window here right as seeding is fixed where there’s hope. It feels like you knew what you were doing.

Trying to track fantasy certainly makes one feel incompetent. The trends are chasing evermore in the game of football. By Week 14, there are people on the field and people deciding victories I hadn’t heard of until Week 14. This has always been the way, of course, but in the last several years it’s become overwhelming. People are out here selling Patrick Laird.

can we all pray for brother james https://t.co/FQkNHrE5wd

Do we all need the escape so desperately that we look to the heavens for a man named Laird?

It is Thanksgiving, after all, a time to be thankful for everything you’ve been given. A warm house. A full plate. The crushing ennui of powerlessness that drives us to draft a fake football team and watch them disappoint us every week. Not to belabor the point but you probably have more free time and money than a great many people on earth. So get outside and do something for someone. I helped out for just a few hours at a shelter a couple of weeks ago. The men and women in the transitional housing system are super appreciative. And just like us, in that they just need someone to believe in them.

I guess Patrick Laird does hold meaning for each of us after all. Thank you, Peter Overzet.

The pickup of the week? Hell, I don’t know. A.J. Brown is back in the news. But don’t expect consistent opportunities for him.

Sam Darnold at Cincinnati: He threw for three and ran for one last week and threw for four the previous week. Mono-Man is suddenly stronger and wiser and perhaps we have a new superhero on our hands. The Patriots sure are the best villain in all of sports. Darnold is suddenly a delicious streaming option. His late-season surge last year was why I thought he was going to perform this year. Now he has me believing again which feels like the beginning of a very tumultuous relationship. It might be impulsive but I might be done if he abandons me here. In all places, Cincinnati, a place one should never be abandoned. Of course, the road of impulsivity is paved with Rashad Pennies, those guys who finally did something when we had long since given up on them. Have I told you about Jonathan Williams?

Nick Foles vs. Tampa Bay: Speaking of desertion, Foles disappeared last week behind Derrick John Henry drilling his way for two TDs against, you guessed it, Foles and Jacksonville. This matchup should be better for Foles. Tampa has been stout against the run and until stifling the oft-impotent Atlanta aerial attack, had been brutal against the pass. Tampa Bay, if you didn’t know, was home to the Weedon Island Culture and then Safety Harbor Culture for thousands of years. The Indian tribes were some of the “few Native American cultures who did not have to farm,” according to Wikipedia. Most of the indigenous population was decimated by the late 1600s. Enjoy your pie.

David Montgomery at Detroit: Last week, he enjoyed 13 carries for 22 yards. Is that good or no? The thing is there’s no telling what this will net us. Detroit gives up 124 a game on the ground but Laird have mercy Trubisky is brutal. The Bears will be missing Uncle Dan’s Thanksgiving Parade. It’s been going on since 1934 when the Chicago leaders were in search of ways to boost the economy. Six years into the Great Depression, the thing Chicagoans needed most was a parade and an excuse to get drunk in the street. My advice if you have to start Montgomery is to start drinking early. By noon you can tell Aunt Janice why you think her politics and her cranberry sauce suck.

Jonathan Williams vs. Tennessee: I only got him in one league. But of course, I didn’t start him this last week. This matchup isn’t ideal, but 26 carries? In today’s NFL, I’ll chase those numbers to the end of the earth. Just as Columbus thought he was doing. Have you ever looked at the map which inspired old Chris to set out to sea? According to their map, America doesn’t even exist. Unfortunately, we are here and so is Matt Nagy.

Darius Slayton vs. Green Bay: In a quiet performance against the Bears he still had seven targets and 4-67. This is a blowup spot. Green Bay has been efficient on offense at home and the Giants remain top-10 worst against the pass. Green Bay should have its way here and then hopefully targets flow to Slayton. I hope Slayton continues to do well right into December because I have so many Santa’s sleigh puns I can’t contain myself.

Manny Sanders at Baltimore: A stinker against Green Bay and that means he’s trending in the wrong direction. On the road against Baltimore might be a scary spot, but if the Ravens can move the ball, and watching Monday Night Football it appears they can do whatever they want, this shapes up to be a decent spot for him.

Gerald Everett at Arizona: Fool me once shame on me, fool me for weeks in a row because I hate myself. But this is a matchup we’ve been waiting for. Back in 2014, I drove through northeastern Arizona. The land is home to the Hopi Indian Reservation. The road cut through rock winding up and down through miles of scenery; red and orange rock under an expanse of infinite blue sky. There was a mysticism about it ripped from the pages of a Cormac McCarthy novel. I remember it was September and I stopped at a Motel 6. I smoked a bunch of grass and drank Wild Turkey and watched a Monday Night Football game wherein Larry Donnell caught three TD passes. The thing about fantasy football is you never forget when a player scratches the surface of greatness for you. Maybe Everett has already peaked. Maybe we are headed down, down, down into the valley. All we can do is sit back and enjoy the ride and hope Gerry has one left in him.

Baker Mayfield at Pittsburgh: What we want to believe is Baker has figured it out. The timing and rhythm are clicking now. But Pittsburgh’s defense has been clicking, too, and a divisional game on the road in Week 13 is a dicey spot to put all your deviled eggs. His inability to get Odell the ball is infuriating. Odell has 30 targets in the last three and just 15 catches. If you wanna be bad, I don’t care. But don’t ruin it for everyone.

Jameis Winston at Jacksonville: Speaking of people who are bound to let us down, please welcome to the stage Jameis Winterception. I just got out of the car after a 12-hour drive from about an hour south of Chicago to my father-in-law’s house in Atlanta. My toddler was a champion, but we stopped several times for lunch and to stretch our legs. There’s a beauty on the roads of America. I’ve been lucky to travel almost all of America by car. It’s a wild place where billboards reading “Jesus Saves” and “Marines.com” are right next to each other. And the South has more Waffle Houses than Illinois has Walmarts. And each section of America is distinctly different with its own personality. And if Jameis truly loved America he wouldn’t be ruining it for the rest of us.

Derrius Guice at Carolina: I had him everywhere in late August. I still think it was just bad luck—if he only had a chance to get rolling—but it wasn’t meant to be. Carolina poses a quality opportunity, but unless you’re desperate (which most of you probably are) I’d stay away from this whole situation. It’s a shame he and Terry McLaurin are dealing with QBs who are about as useless as Dan Snyder.

Joe Mixon vs. New York Jets: He’s hampered by his terrible team and there’s nothing anyone can do for him now.

If you watched Joe Mixon at Oklahoma, you'll find it amazing that 31 other runningbacks have more catches than Mixon does this year.
He wasn't targeted one time this week.

This is like if the Ravens didn't let Lamar Jackson run with the football.

Randall Cobb vs. Buffalo: He had a decent effort against New England, considering they have only let four WRs over 80 yards this season. And Buffalo is more of the same. Anyone else have Zeke? Tired of this nonsense. This is all Jerry Jones’ fault. I hope he loses right into the afterlife. Send his ass to the third circle of hell where he has to watch Jason Garrett try to make mille feuille over and over for eternity.

Will Fuller vs. New England: I know what he did last week. It was one of five this year. He’s got three left. Good luck guessing.

His dad told me that he named his son Will Fuller V because he'll always help you win 5 games each year.

We're only 11 Fuller generations away from the ultimate weapon, Will Fuller XVI.

Jonnu Smith at Indianapolis: It should be a thing, but it’s not. I guess he’s the Cleveland Browns of tight ends.