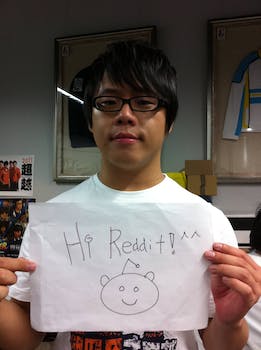 A top video-game player pops up on the social news site, and fans go wild.

“I am Sen, today is my first time to see Reddit, just want to say hi to everyone!”

How did Reddit’s homepage, the showcase of the social news site’s most interesting posts, get taken over by a newcomer?

Sen hails from Taiwan. His full name is Yang Chia Cheng, and he’s quite a big star in the world of professional StarCraft gaming.

Reddit may seem like an alien world to outsiders—but sometimes the social news site mystifies even longtime redditors.

The culprit, more often than not, is the site’s r/starcraft community. Fans of the militaristic sci-fi game StarCraft II, which has sold more than 4.5 million copies worldwide, make up one of Reddit’s largest special-interest groups.

And while they use Reddit, they have a language and culture all their own, making their contributions to the site’s collective wisdom occasionally perplexing. Like Sen’s post.

Even bigger news: He’s going to do an IAmA (“I am a”) question-and-answer session sometime next week.

He’s won a number of international competitions and most recently placed third in a major American competition, the North American Star League.

According to a bio page on Liquipedia, a StarCraft wiki:

“Sen can play almost any way he wants. He has incredible aggressive play, amazing macro and some brilliant tactical play … Sen is the complete package and a very hard player to predict.”

Professional gaming stars rarely make the news on CNN, ESPN, or other major media. But on Reddit, which receives over a billion page views a month, they’re front-page material.