And it also offers news, comedy, and even documentaries.

Spotify is expanding its realm of entertainment by adding podcasts and video to its latest iOS update. Tech enthusiast Anil Dash noted the long-teased Spotify update to his Twitter page Monday afternoon.

Okay, so @Spotify added podcasts. But I'm only gonna start one if it'll show up in your Discover Weekly playlist. pic.twitter.com/4tsYIOC82y

The new feature will give users access to news content, documentaries, and pop culture goodies through podcasts and video. For now, most of the content will roll out to free users. BBC, the Associated Press, BuzzFeed, and Fusion are a only a few of the many media outlets offering content through the streaming app’s rising facet. 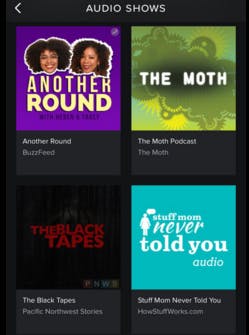 Podcasts and video are available to Spotify users in the U.S., UK, Germany, and Sweden.

Photo via Fe Ilya/Flickr (CC BY 2.0) | Remix by Max Fleishman