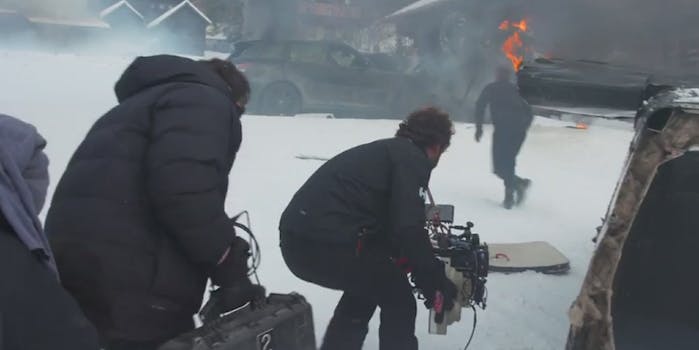 What has James gotten himself into this time?

Daniel Craig has once again donned his glasses and his Walther PPK. For the foreseeable future, on sets across the world, Craig is Bond, James Bond. Recognizing that the world is hungering for a glimpse, the producers of Spectre, the next film in the series, released a behind-the-scenes clip on Thursday that shows us a little bit of what Bond (and Craig) are dealing with this time around.

The clip begins with the iconic Bond music and shows beautiful, snowy landscapes. Spectre stars Craig, , and Dave Bautista, along with director Sam Mendes and other crew members, discuss this ambitious shoot on an Austrian mountaintop.

The clip, which is less than two minutes long, nonetheless has us wondering what challenges Bond will be facing at this high-altitude encampment.

H/T The Verge | Screengrab via jamesbond007/YouTube