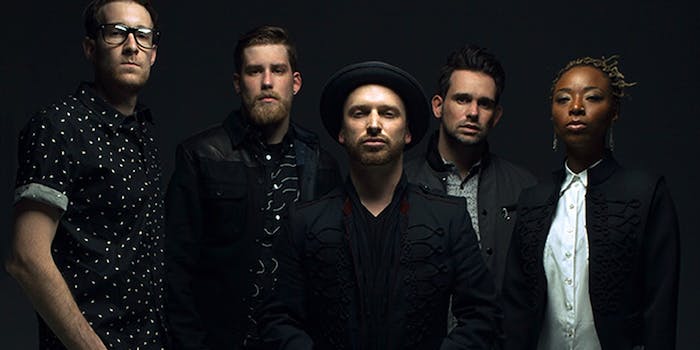 The ‘reverse’ sounds of SomeKindaWonderful

The fast-rising soul band breaks down the key influences from its self-titled debut.

In Spotify Essentials, the Daily Dot curates custom playlists created by some of our favorite artists and writers. In this installment, SomeKindaWonderful discusses the influences informing its self-titled debut, available now for preorder.

We went ahead and called this playlist the “Reverse” playlist. One because it’s the name of our new single, and two because I had to make a ‘reverse’ move in my career in order to move forward as an artist. I left sunny L.A. (and my solo career behind) to go to one of the coldest damn places on Earth, Cleveland, Ohio, where I met these guys and we formed this band. “Reverse” was the first song we made and the first song we’ve released. Hope you like this mix which kicks off with reverse and goes through some of the songs that have really influenced who I am today.

I grew up mostly listening to stuff from the ‘60s and early ‘70s, while playing mainly blues guitar. The Beatles are by far my favorite band, and a large reason why I began to pursue music when I was a kid, so it was hard to only include two by them. I love when you can put a song on loud in your car and really feel what the song is about.  When a song can take you to another world with a groove or emotion, that’s a super powerful and beautiful thing. Artists like Paul Simon, Van Morrison, or Bob Dylan always do that to me and it’s what I always try to do when creating music myself.

I grew up in a family with a strong background in music, and it definitely affected my musical tastes.  My older brothers got me into the classics like the Police and Genesis. As I grew older I got really into recording and loved Steely Dan and Michael Jackson for their amazing-sounding records.  I always had a love for hard rock/metal for its high intensity and good ol’ rock n’ roll vibe.  I always surround myself with all genres of music and think it helps keep an open mind when creating music.