Social media is all about No.1

Make sure you're near a bathroom when you read this. Every day, we at the Daily Dot find something that people on Facebook are sharing and in turn, share it with you—with a little explanation. Here’s today’s share.

“Social Media Explained” in terms of documenting one’s need to urinate, anyhow, is making a big splash on Facebook. It explains how someone might use different forms of social media to describe the urge to release number one: “I need to pee,” for the twitterer, for example, and “There is where I pee” for someone on Foursquare.

Posted this Monday, it’s ballooned today into almost 6,000 shares. It’s been liked almost 14,000 times since then. That’s six times the number of likes the actual poster of the image, Social Snap, a media analytics company, has on its page.

Social Snap didn’t invent this photo, though. The shared image is a degree removed; it’s been printed out, then photographed. The original traces back at least as far back as February 2011, when was featured on the Tumblr Vanished-Omen, then picked up the following month by The Daily What. 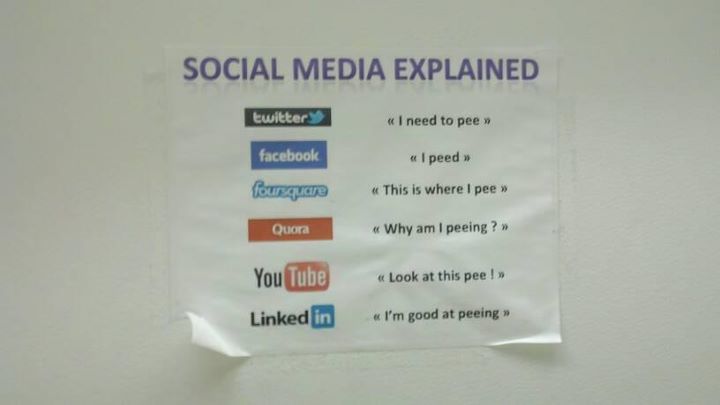