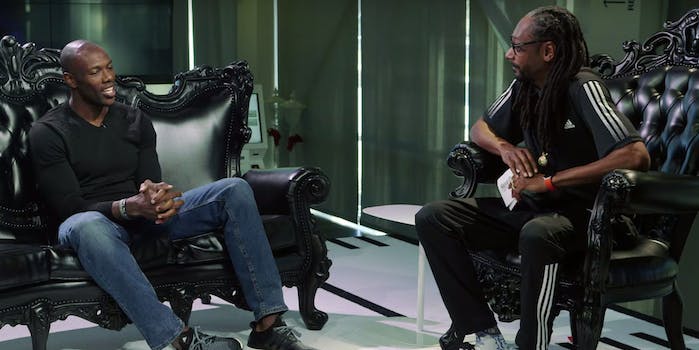 'Football in particular is special.'

The series is called Turf’d Up, and it can be found on Snoop’s WestFestTV YouTube channel. In the first episode, Snoop explains why he loves the gridiron so much. “Football in particular is special,” he says, “because it teaches kids things in ways that no other sport really does, like the fact that no one player is bigger than the team.” He then welcomes his first guest, Terrell Owens, and proceeds to sit down with the former NFL wide receiver for a candid discussion about sports and pop culture.

Turf’d Up isn’t just an entertaining venture for sports fans; it also functions as promotional material for the Snoop Youth Football League charity. Snoop will also highlight the SYFL in an upcoming AOL webseries that will focus on the league’s top teams.

Former NFL players will make up a large portion of Turf’d Up’s guests, but Snoop will also welcome several other personalities to his studio, including sports journalist Rich Eisen, comedian George Lopez, and YouTube star iJustine. “This whole process has been an absolute dream,” said Snoop in a press release. “Sports is a true passion of mine and being able to create a show where I get to invite my friends to talk about all things sports is something I have always wanted to share with everyone. Turf’d Up takes a different, more playful approach to the average sports show so I am sure that everyone who tunes in will really enjoy it.”

Turf’d Up is produced by the Cashmere Agency and sponsored by Adidas Football. It will run for eight episodes, with a new one arriving each Wednesday.