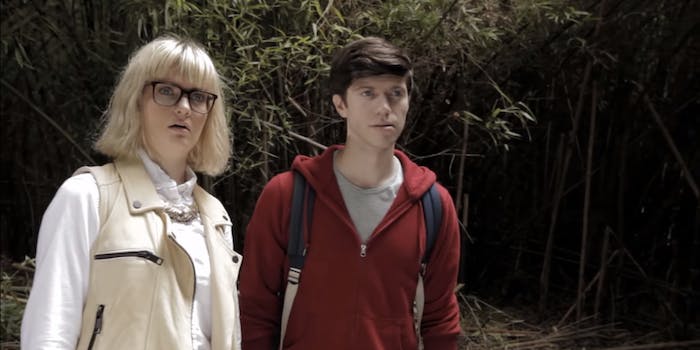 ‘Snarky Sidekick’ is the webseries for adventure lovers

A 'Snarky Sidekick' takes over for a deceased action hero.

What if an adventure flick lost its hero? That’s the premise of Matthew Starr’s new webseries, Snarky Sidekick, a seven-episode adventure in which a snarky, nerdy sidekick Simon must take over an unfinished quest in the wake of boastful hero Tom Raker’s death.

True to its title, the series is full of snark, wit, and adventure. Other webseries and Internet videos may nod to beloved genres or spoof their heroes, but Starr’s ambitious new production goes the distance, packing in real cliff-hangers (one scene actually takes place on the side of a cliff); in-depth booksmarts (Siobhan Thompson, who plays Heather, has a degree in archaeology and is a riot on Twitter); and a killer score (composed by Matt Rubano, former bassist for Taking Back Sunday).

The adventure begins as Simon, the titular sidekick, discovers his counterpart has died anticlimactically of natural causes. Stunned by the news, Simon can’t quite process it: “When [Tom] finds out he’s dead, he’s going to be pissed off.” But, aided by the arrival of former adventure teammate Heather (Thompson), Simon answers the call to adventure.

Starr, a veteran of UCB Comedy and a performer at the Upright Citizens Brigade Theater, told the Daily Dot: “[My inspiration] came from a bottomless love of films like Indiana Jones and National Treasure… I wrote the part of Simon for myself because playing a wise-cracking nerd in an action movie has always been my dream role.”

The love shines through in Starr’s performance. Simon is a fascinating blend of whiz kid confidence and schoolboy nerves. And Starr’s castmates are top-notch. Don Fanelli is a riot as Tom Raker, who, though deceased, pops in from time to time to mock Simon and remind him he’s a mere sidekick. Natasha Rothwell (SNL) is hilarious as the deadpan morgue doctor who explains that Tom is not “superdead” he’s “just dead.” And Thompson, as the perpetually reasonable Heather, anchors the nervous sidekick with a patient wit.

The entire series clocks in at a little under 40 minutes and makes for a terrific binge-watch. The playlist is available on Starr’s YouTube channel. So if you’re a snarky adventure fan, just press play.