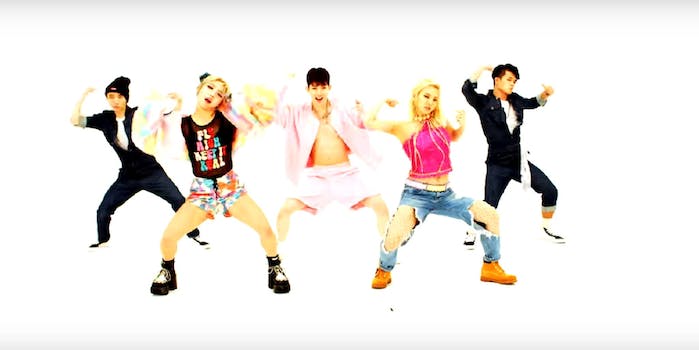 Collaborations between idols in K-pop always jolt the genre, especially when it involves two of the industry’s top labels, JYP and SM Entertainment.

In an exciting new dance track, MissA’s Min, 2AM’s Jokwon, and Girl’s Generation’s Hyoyeon teamed up for “Born to be Wild,” the latest installment of SM Entertainment’s digital music project, SM Station. Chief executive Park Jinyoung of JYP Entertainment wrote and composed the song, and also made an appearance in the video, which debuted on Thursday.

Fierce gazes, wild clothing, neon lights, and popping dance moves bring out the group’s wild side. The trio—whose members took on the name Triple T for this collaboration—turn up here. The music itself flaunts electro beats and Bollywood-inspired rhythms.

SM Entertainment rolled out SM Station at the start of this year. The project invites artists, producers, and songwriters of other agencies to collaborate with its own talent for new music, released weekly.

Triple T’s collaboration track has drawn much attention not only because of the partnership between SM and JYP, but because the three artists involved have an extensive history. Between Min and Hyoyeon’s pre-debut days of dancing together and the trio’s veteran status in the K-pop industry are more than 10 years of friendship.

Although SM Station tracks are exclusively digital, Triple T performed a special stage of “Born to be Wild” on Thursday’s episode of M!Countdown.