Here's a meme guide for novice gamers who have yet to take an arrow to the knee.

Skyrim, a role-playing game where the player must save the world, sold 3.4 million copies within two days of its release, and is still at the top of charts almost a month after going on sale. More people are streaming Skyrim on Steam then they are playing Call of Duty: Modern Warfare 3 or Battlefield 3.

It’s no surprise then, that Skyrim fans would take nuggets from in-game action and spread them across the Internet.  (Folks have also taken to combining Skyrim with their favorite things, like Skyrim and My Little Ponies)

For novices, here’s a handy guide to the memes generated from Skryim that the digital masses are referencing in YouTube and Reddit comments.

“Fus Ro Dah,” a shout-power the hero in Skyrim emits to knock enemies back, has already been documented by meme-chronicling site Know Your Meme. Fus Ro Dah’s have been incorporated into various YouTube videos, one of which features a televangelist.

The top comment on that “FUS RO DAH!!!” video happens to reference another Skyrim meme; “I used to be a televangelist myself. Then I took an arrow in the knee…” wrote Cellsplitter.

Smosh even referenced this meme on its website a few days ago in a post about common YouTube comments. The phrase has also been chronicled on Know Your Meme. 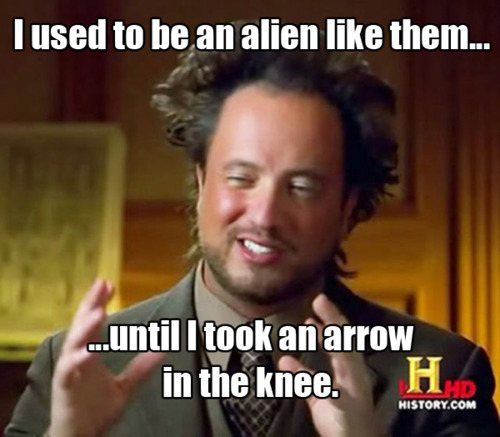 Another expression uttered by guards has left many players tickled pink. One guard, commenting on the “curved swords” of a waring faction, has spawned videos and even a comic.

One of the least popular, but the Daily Dot’s favorite, is the “How to sit like a Jarl” meme, which comes from a comic posted on Reddit almost a week ago. A Jarl is the equivalent of a chief, presiding over a city, and his sitting posture has spawned real-world imitations. (In fact, this Daily Dotter now only sits like a Jarl.)