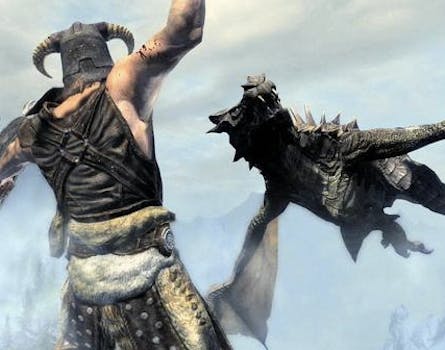 Conspiracy theory or hidden Easter egg? Skyrim players are eager to find out on Christmas.

Conspiracy theories can be irresistible. The good ones have an internal logic that makes them tough to dismiss once you’ve accepted just a small part of them. A thought here, a hidden meaning there, a few scribbles on a centuries-old map, and suddenly you’re convinced that Jesus’ tomb is hidden in the Louvre.

One such theory has overtaken Reddit’s r/Skyrim community and has players convinced that this Christmas might reveal an enormous Easter Egg in the popular game: A quest that turns players into all-powerful dragons.

To outsiders, the theory sounds a bit far-fetched. But to fans, nothing could be clearer. Based on some runic translations by redditor Scrayton and a Skyrim world map drawn by redditor POPTARTBURNR, theorists believe they’ve found an enormous transmutation, or spell casting, circle, inspired by the Japanese anime Fullmetal Alchemist.

“So I know this may seem ridiculous, but hear me out,” Scrayton wrote. “I realised that [the world map] was in the shape of a circle, and if you connect the cities, it made a pentagon.”

Based on the lore of the Japanese anime, to “cast” this transmutation spell, players would need to create “crests of blood” by killing five dragons and commit mass murder in five towns. This would also have to happen on the “Promised Day,” which some fans interpreted as Christmas.

And the perceived reward?

“You. Will. Be. Able. To. Transform. Into. A. Goddamned. Dragon. After. Christmas.” speculated aminon.

From there, things fell into place. Some fans speculated that POPTARTBURNR works for Bethesda, Skyrim’s developers, and the typo in his username was a result of him hurriedly rushing to share this secret Easter Egg with the Reddit community before his bosses found out.

“Right now, Bethesda people are refreshing this thread, pissing themselves that players have finally figured out their awesome clue,” wrote Tofinochris.

Redditor Kirby998 even created a video of himself completing the transmutation spell on YouTube—and failing.

“I’m pretty sure I did this wrong, not to mention this is probably not the Promised Day,” he said, not doubting the veracity of the theory for a moment.

On a platform that is known for skepticism, r/Skyrim’s largest conspiracy theory yet shows that fans really want to believe.