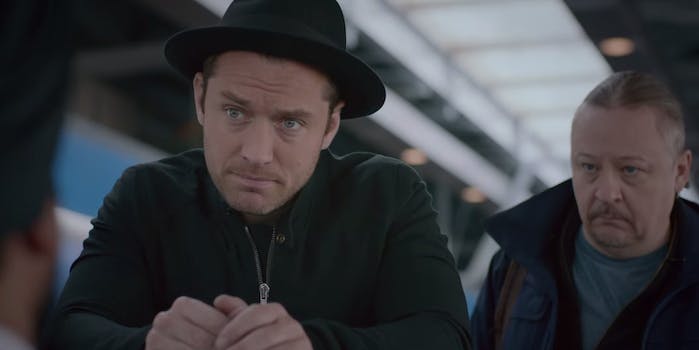 You need to stream these 6 British webseries

We're giving them the royal seal of approval.

The United Kingdom has many wonderful things: pseudo-celebrity–generated, dead badger-related car crashes; cryptozoological mysteries featuring washed-up ’90s rockers; and urban foxes that steal brake fluid. But not that many webseries, oddly enough, at least in comparison to the U.S.

Whereas every North American with a camera seems to have at least shot a trailer for an upcoming series that will showcase their talents, the U.K. has always seemed somewhat more reticent in embracing what is such an accessible and liberating art form.

But don’t despair: What the home of Shakespeare, Hitchcock, and hot and cold taps lacks in the quantity of their webseries, it certainly makes up for in their quality—and that distinctive British charm you Yanks can’t get enough of.

Here are six series from across the pond that you are bound to enjoy.

For those of you unfamiliar with David Mitchell—a man perhaps only surpassed in British televisual ubiquity by Stephen Fry—this series of rants on life’s annoyances is the time poor’s entry point to his oeuvre.

It can be unashamedly grating viewing, the very point of each episode being to escalate each grievance far above its deserved attention. But for those who are new to Mitchell’s irascible public persona, it can be quite a hoot. And if it leads a few down the path toward his work with Robert Webb, such as their series Peep Show or their excellent sketch series, that can only be a good thing.

The Young Vic is a London theater, publicly subsidized and located outside the commercial sector of the West End. Nevertheless, the star power of its productions—usually modern interpretations of classics—is impressive, and the short films it has inspired are no exception.

YV Shorts are created as supplement to the theater’s productions. So we find films starring Patrick Stewart, Jude Law creating a metaphor for the trevails of Belarus Free Theatre, or Gillian Anderson reprising her Blanche from last year’s Streetcar.

To some it may all seem like indulgent, self-referential, theater-luvvie nonsense but you really don’t need to know the play to enjoy what are beautiful little films. And where else are you going to find a short film directed by actor du jour Chiwetel Ejiofor?

If you haven’t seen Garth Marenghi’s Dark Place—the self-critical horror-medical-thriller-spoof show-within-a-show that was the finest television comedy series of the early 2000s—then I’ve just planned your next 150 minutes. But for those that have, you may well be wondering what ever happened to cocreator and star Matthew Holness.

While Richard Ayoade, Dark Place’s other creator, has been extremely busy writing books, directing films and Vampire Weekend music videos, and helping to flog consumer products on Channel 4’s Gadget Man, Holness seems to have disappeared off the planet.

But in reality he has been readying a new character, the Reprisalizer and that character’s author, Terry Finch, who appears in this short film. With live dates looming, there’s a good chance that we’ll finally start seeing more of this superior comic talent.

A mockumentary centered on three rugby-obsessed, early-20s men and their amateur club, the Clapham Falcons, sounds like pretty pedestrian fare; I for one would be quite happy to never see another webseries that utilizes each character’s proximity as housemates as a jump-off. But its pitch-perfect rendering of a particular type of Londoner—the young, privately educated professional—means that Don’t Drop the Egg rises straight to the top of the pile.

You may not like rugby or may never meet anyone called Freddie, Archie, or Ollie, but after watching this, you’ll be an expert on the type that head straight to Infernos after a Saturday afternoon on the lash at Twickenham.

Surrealist comedy pioneers Vic Reeves and Bob Mortimer have just announced that they are returning to the live arena for the first time in 20 years, which is as good a reason as any to whisk through this series from a few years ago. It’s probably not their best material, and the format—one sketch per episode—guarantees that each segment is either hit or miss, but sometimes it’s just nice to worship at the altar of comic visionaries. Plus it’s sponsored by Fosters, which ties very nicely into their ongoing attempt to tout every single consumable available to man.

Contrary to what you may perceive from films—and by the proliferation of its alumni in the arts, Mitchell, Fry, Ayoade, and Holness included—not every British person gets into Oxbridge. Many went to universities such as Bristol, which are excellent institutions but filled with students who wish they were (and think they should be) elsewhere—something that they will of course never admit.

And it’s this discomfort which acts as the emotional core of the terrific High Renaissance Man, the first outing of the now prolific comedy duo Totally Tom. Expanding on the class-based gags of unrelated hit “Gap Yah,” we are exposed to the comic potential of two characters both living Mike Damone’s mantra from Fast Times at Ridgemont High: to always “act like wherever you are, that’s the place to be.”