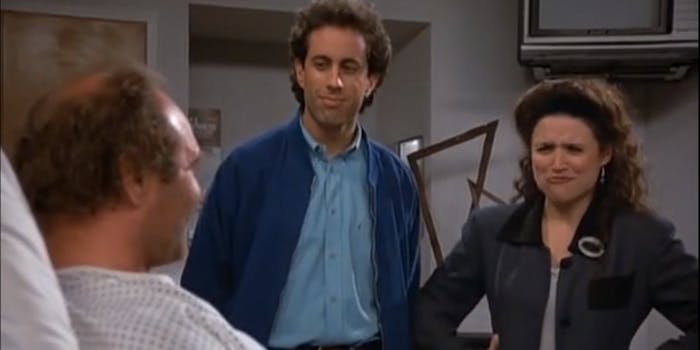 Unsurprisingly, Seinfeld is still great even without the funny.

What if your favorite (or least favorite) sitcom cut all the gags? Would it still hold up as a story, or without the slapstick does the plot crumble? That’s the question YouTube user Tunglebrek set out to answer with his “NO JOKES, ALL PLOT” edits of popular television episodes.

So far John Winslow, the man behind Tunglebrek, has taken on three episodes of different iconic sitcomes — The Big Bang Theory, Friends and Seinfeld. Without the gags they’re considerably shorter than their televised versions, clocking in at around 3 minutes in comparison to the 22 minutes on TV. Winslow says the inspiration for his series came directly from a submission to Reddit where a user took an episode of Family Feud and edited it down to just barebones gameplay.

“Family Feud relies on a lot of banter, of course, so the show is pretty short when you take all of that stuff out,” Winslow told The Daily Dot via email. “It’s the same sort of thing with some sitcoms – the plot is often just an excuse for comedic material. It’s only there to give the writers something new to riff on. But sometimes it can be more than that.”

His selection of specific shows and episodes is anything but haphazard.

“I picked Seinfeld, Friends, and Big Bang Theory because they’re the most popular modern sitcoms, and there’s a nice contrast between them in how they tell their stories and why they’re telling their stories,” said Winslow. “I couldn’t think of a better selection to start with. The episodes themselves are chosen to hopefully find a typical episode of their show, with nothing too out of the ordinary going on.”

So far he’s had users point out that characters like Chandler have nothing to say once the jokes are cut, while Seinfeld fans continue to compliment Seinfeld on staying funny without the jokes. Winslow found that The Big Bang Theory “utterly failed to hold up.”

“It was nothing but a setup for Sheldon’s antics as the robot, and went nowhere once he made the transformation,” he continued. “But I don’t see that as a flaw necessarily. Big Bang Theory is just a different kind of show. There was a time when I absolutely loved Family Guy, and every word in that show is just an excuse for the upcoming punchline. They’re different kinds of comedies with different priorities. But when you take away their jokes, there’s not much left.”

Winslow says the next comedy to get the NO JOKES treatment is the U.S. version of The Office.

“I think the results will surprise a lot of people,” he said.